Energy and the 2016 Presidential Election

In less than a week, the most controversial and acrimonious presidential election in living memory will be over. Energy has largely been a second-tier issue in this contest, although the divergence in the candidates' views on this vital subject is stark. Fortunately, the energy consequences--planned and unintended--of the last two US presidential elections hold some useful lessons for considering the proposed energy policies of this year's two front-runners.

As we look back, please recall that for most of the 2008 campaign the average US price for unleaded regular gasoline was over $3.00 per gallon. Much of that summer it was at or above $4.00. Four years later, from Labor Day to Election Day of 2012, regular gasoline averaged $3.76 per gallon. The comparable figure for the last two months of the 2016 campaign is just under $2.25.

In 2008 energy independence was a hot issue. Then-Senator Obama ran on a platform that targeted reducing US oil imports by over 3 million barrels per day, mainly through improved fuel efficiency. In his view US oil resources were effectively tapped out--remember "3% of reserves and 25% of consumption"? The main role he envisioned for the US oil and gas industry was as a source of increased tax revenue. His primary focus was on reducing greenhouse gas emissions through large federal investments in green energy technology. He would soon deliver on that promise with the $31 billion renewable energy package included in the federal stimulus of 2009.

When he was running for reelection in 2012, President Obama had kinder words for conventional energy, particularly the large expansion of US natural gas supply due to shale gas. He even took credit for "boosting US domestic production of oil". That point provoked an extended argument in the second presidential debate that year. Importantly, when the President emphasized renewable energy, energy efficiency and emissions, it was within a broader framework of "all of the above" energy.

At the same time, following the failure of comprehensive energy and climate legislation in his first term, his administration has pursued major new regulations aimed at achieving its energy and environmental goals. However, some of the most sweeping of these, including the Clean Power Plan, have gotten hung up in the courts, while others have yet to be fully implemented.

In retrospect President Obama was lucky. The shale energy revolution wasn't on his radar in 2008 and received little or no help from his administration, but it has increased US energy production by more than 17%, net of coal's losses, since he took office. It has made a major dent in US oil imports and CO2 emissions.  In the process, it saved consumers hundreds of billions of dollars on their energy bills, reduced the US trade imbalance, generated large numbers of new jobs when it mattered most, and provided the primary means for reducing US greenhouse gas emissions to their lowest level since before Bill Clinton ran for President.

Meanwhile, the renewable energy revolution on which his 2008 campaign pinned most of its hopes is still a work in progress. The cost of non-hydro renewables, mainly wind and solar power, has fallen dramatically and their deployment has grown impressively, expanding by a combined 135% from 2008 to 2014, or 15% per year. Wind and solar power are reshaping US electricity markets and changing the economics of baseload power plants, including nuclear plants. However, these sources still generate just 8% of US electricity and accounted for less than 3% of total US energy production in 2015.

What can we learn from the experience of the last two presidential terms? We are certainly in the midst of a long-term transition from a high-carbon energy economy to one using lower-carbon fuels and low- or effectively zero-carbon electricity. However, the numbers tell us that with regard to implementation, if not technology, we are closer to the beginning of that transition than to its end. The next President can double renewables, and that would still leave us reliant on conventional energy and nuclear power for three-quarters of our electricity and 90% of our total energy needs.

Going from 3% of energy from new renewables to the levels needed to meet the emissions targets that the US took on at Paris last year represents an enormous technical and financial challenge. It won't happen without a healthy economy, supported by a diverse and flexible energy mix anchored by domestic oil and natural gas from public and private lands and waters.

Although the Obama administration has added numerous regulations affecting energy, it stopped short of derailing the shale revolution. As a result, it has benefited greatly from the increased flexibility and energy security shale is providing. President Obama adapted his approach to energy and came around to recognizing the need for an energy mix that balances new, green energy with the best conventional energy sources. That's the lens through which we should view the energy proposals of this year's candidates.

There's no question that Secretary Clinton would promote the continued growth of renewable energy and the wider application of energy efficiency. If anything, she seems to be even more focused on climate change and clean energy than Barrack Obama was in 2008. However, her campaign website portrays oil and gas mainly in negative terms, with a focus on cutting their consumption, along with the industry's tax benefits. While explicitly recognizing the role that increased US natural gas production has played in reducing emissions, her policies would directly target the primary source of that growth.

Shale gas now accounts for half of all US natural gas production, but Secretary Clinton is on record supporting much stricter regulations on "fracking", the common shorthand for the technological processes involved in producing oil and gas from shale: "By the time we get through all of my conditions, I do not think there will be many places in America where fracking will continue to take place,” she said in a March debate with Senator Sanders.

Reversing the recent growth of natural gas production from shale would lead to higher emissions during the next four to eight years. With less gas available, natural gas prices would rise, and the remaining coal-fired power plants would ramp back up to fill the gap, even as renewables continued to expand. That is happening in Germany today as that country turns away from nuclear power. In the US, without the contribution from natural gas and nuclear power plants, another of which just shut down permanently, our climate goals would be out of reach.

Recently, Secretary Clinton was also cited as wanting to expand the current administration's moratorium on coal development from public lands to encompass oil and gas. As shown in the chart below, based on data from the US Energy Information Administration, this production is already trending downward, overall. Imposing a moratorium on oil and gas development on public lands would accelerate that contraction, without new wells to offset the decline from mature fields. 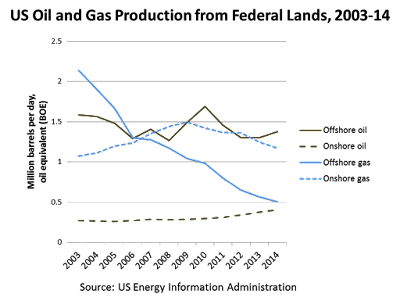 If implemented as described, Secretary Clinton's policy toward shale energy would have an even more pronounced effect on US energy supplies than restricting development on federal land. With oil prices low, shale oil production has already fallen by 1.2 million barrels per day since output peaked in May 2015. The drop would have been much steeper had US producers not been able to focus their greatly reduced drilling activity on their most productive prospects.

US oil imports are increasing in tandem with falling shale oil production and rising demand. We still have 260 million cars, trucks and buses that require mainly petroleum-based fuels, while electric vehicles make up a tiny fraction of the US vehicle fleet. If shale oil drilling were further curtailed by new regulations, the shortfall would be made up from non-US sources and imports would grow even faster. The party that stands to gain the most from that is OPEC.

From what I have seen and read, Secretary Clinton's proposed energy policy would undermine the all-of-the-above energy mix necessary to maintain US economic growth and energy security as we transition to cleaner energy sources. It is disconnected from the lessons of the last eight years and should not be implemented in its present form.

There is no doubt that Donald Trump views the shale revolution and the resources it has unlocked very differently from Secretary Clinton. It has been harder to gauge where he stands on other aspects of energy. During the primaries, Mr. Trump's energy policy lacked much detail, as I noted at the time. He has since largely remedied that, though many of the points raised on the energy page of his campaign's website seem mainly intended to counter Secretary Clinton's positions.

Mr. Trump's energy vision and goals are posted on his website, and he has made several speeches on the subject, focused mainly on expanding US oil and gas production and making the US a dominant global player in the markets for these commodities. His main theme is sweeping deregulation and reform, including revoking the current administration's executive orders and regulations affecting infrastructure projects, resource development, and the role of coal in power generation.

He endorses an all-of-the-above approach, but there's still little mention of renewables, efficiency or nuclear power. In any case his support for renewables is not linked to man-made climate change, which he disputes. He is also on record opposing US adherence to the Paris Climate Agreement.

How do Mr. Trump's ideas on energy square with the lessons of the last eight years? It seems clear he would rather swim with, rather than against the tide of the shale revolution. It's less clear how much additional activity that would stimulate in the near term if oil and gas prices remain low, even if regulations could be cut as he proposes. As for renewable energy, there doesn't seem to be enough information to assess where it fits into his version of "all of the above".

It's important to keep in mind that energy is not an end in itself. Stepping back from the details, and at the risk of grossly oversimplifying some complex and thorny issues, the key difference I see between the two candidates in this area is that Mrs. Clinton's energy policies seem designed mainly to serve environmental goals, while Mr. Trump's energy policies seem aimed at mainly economic goals.

In that sense, the choice here looks as binary as on many other issues this year. Just don't interpret that conclusion or my analysis above as an endorsement of either candidate.
Posted by Geoffrey Styles at 8:52 AM 2 comments: