A Lesson in Oil Pricing

In 2008, near the peak of a historic oil-price spike, the US Energy Information Administration (EIA) published a study projecting that opening the Arctic National Wildlife Refuge (ANWR) for drilling would reduce oil prices by no more than $1.44 per barrel, compared to their forecast without ANWR. Adding up to 1.5 million barrels per day to US production by 2028 would thus save motorists less than 4¢ per gallon. That result appeared during a Presidential election campaign that featured the slogan, "Drill, baby, drill!" and received significant attention.  I hope the authors of that study have been watching the current oil price collapse, because it provides some useful lessons in how oil prices are determined.

Oil traders and most economists understand that oil prices are ultimately set by the last few million barrels per day of supply and demand in the market, and resulting changes in inventory. The oil price spike of 2007-8 provided firm evidence for this phenomenon, as rapidly growing demand and production problems eroded global spare production capacity to a level of around 2 million barrels per day (MBD) compared to more than 5 MBD in late 2002, prior to the Venezuelan oil strike and the start of the Iraq War. This may have been obscured by the rise of the widely publicized Peak Oil meme, which provided a more viscerally appealing explanation for high oil prices until it ran out of steam recently.

A chart from one of the International Energy Agency's recent Oil Market Reports provides a neat illustration of the main factors leading to the recent price collapse. (See below.) Here, the emergence of a sustained surplus of 1-1.5 MBD starting in early 2014--less than 2% of the global oil market of around 93 MBD--was instrumental in depressing oil prices by more than half. Another factor was that, contrary to a key assumption of the 2008 EIA study, OPEC elected not to "neutralize any potential price impact of (additional US) oil production by reducing its oil exports." While shale technology has expanded US oil output by a multiple of what the EIA expected ANWR might add, the benefit for consumers isn't just pennies per gallon, but more than a dollar, at least for now. 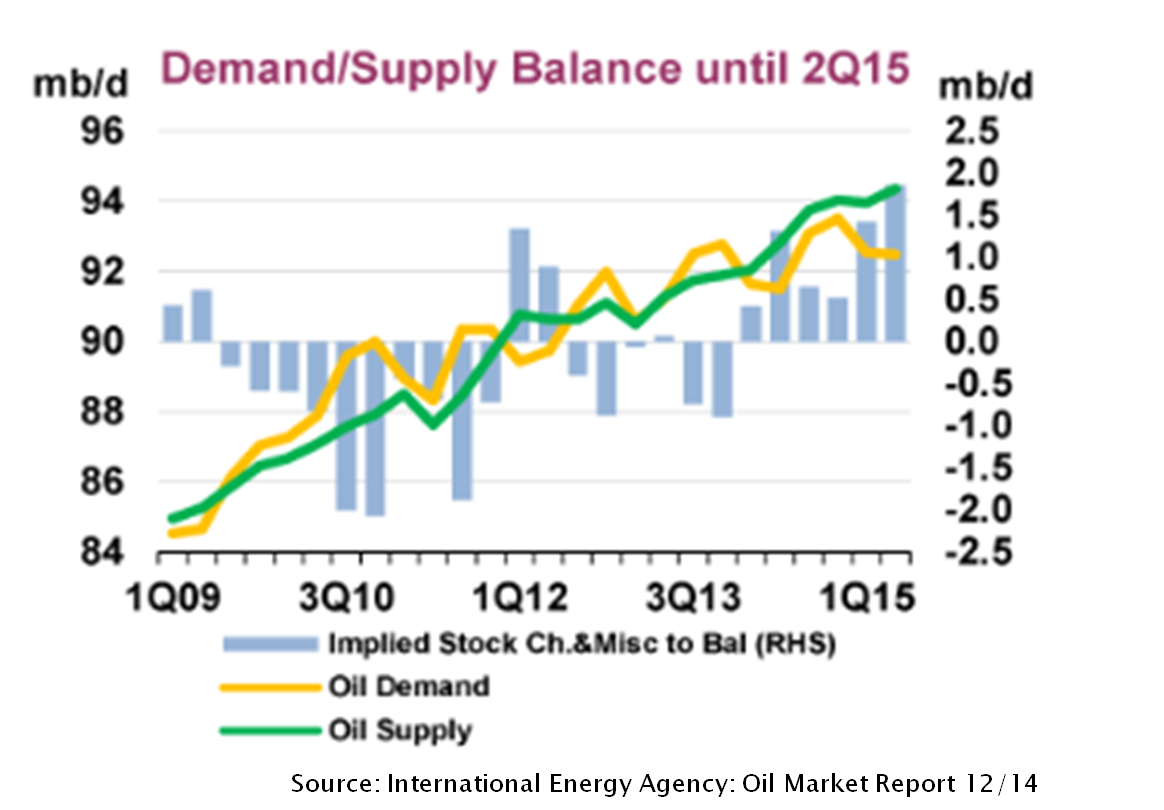 Since the price of oil is set at the margin, it is also essentially independent of the total size of the oil market. That has important implications for how we envision the future of the oil market, especially in a world that is increasingly concerned about greenhouse gas emissions and transitioning to cleaner sources of energy. Even if future oil production were to be increasingly constrained by energy efficiency improvements and environmental policies, it doesn't necessarily follow that future oil prices must be low. That would only be the case if producers mistakenly invested in more production capacity than the market actually ended up needing.

As things stand today, there is a significant risk that the industry will not invest enough in future capacity, and that prices will again rise sharply before electric vehicles and other alternatives could scale up sufficiently to fill the gap, particularly if low oil prices also deter their growth. That's because without large investments in new oil output, current production will eventually decline from today's levels. Field-level decline rates range from just a few percent to 65% per year, depending on whether we're looking at the conventional oil reservoirs that make up over 90% of global supply, or at US shale production, which accounts for less than 5% of world oil.

Perhaps the bottom-line lesson is that we should never become complacent about the potential price volatility of what is still, at this point, an indispensable commodity. The shale revolution and OPEC's current behavior don't guarantee that oil prices must remain depressed, any more than previous concerns about Peak Oil meant they would remain high indefinitely.

What Will Fuel Today's Advanced Vehicles?

Last month I attended the annual "policy day" at the Washington Auto Show, which typically emphasizes green cars and related technology. This year it included several high-profile awards and announcements, along with a keynote address by US Secretary of Energy Ernest Moniz.  Yet while the environmental benefits of EVs and other advanced vehicles are a major factor in their proliferation, I didn't hear much about how the energy for these new car types would be produced.

The green car definition used by the DC car show encompasses hybrids, plug-in electric vehicles (EVs), fuel cell cars, and advanced internal-combustion cars including clean diesels. One trend that struck me after missing last year's show was that most of the green cars on display have become harder to distinguish visually from conventional models. For Volkswagen's eGolf EV, which shared North American Car of the Year honors in Detroit with its gas and diesel siblings, and Ford's Fusion energi plug-in hybrid the differences are mainly under the hood, rather than in the sheet-metal.

Of course some new models looked every bit as exotic as you might expect. That included BMW's i8 plug-in hybrid, which beat Tesla's updated 2015 Model S as Green Car Journal's "Green Luxury Car of the Year", and Toyota's Mirai fuel-cell car. The Mirai is expected to go on sale this fall in California, still the nation's leading green car market due to its longstanding Zero-Emission Vehicle mandate focused on tailpipe emissions.

Many of these cars have electric drivetrains, increasingly seen as the long-term alternative to petroleum-fueled cars. Although Secretary Moniz pointed out that the US government isn't attempting to pick a vehicle technology winner, there seemed to be a definite emphasis on vehicle electrification and much less on biofuels than in past years.

Another announcement at last month's session addressed where such vehicles might connect to the grid. BMW and VW have partnered with Chargepoint, an EV infrastructure company, to install high-voltage fast-chargers in corridors along the US east and west coasts to facilitate longer-range travel by EV. In making the announcement BMW's representative indicated that EVs will need fast recharging in order to compete with low gasoline prices. With the relative cost advantage of electricity having become a lot less compelling than when gasoline was near $4 per gallon, EV manufacturers need to mitigate the convenience concerns raised by cars with typical ranges of 100 miles or less.

Getting energy to these cars more conveniently still leaves open the basic question of the ultimate source of that energy.  Perhaps one reason this isn't discussed much is that unlike for gasoline or diesel-powered cars, there's no simple answer. The source of US grid electricity varies much more than for petroleum fuels: by location, by season, and by time of day. However, even in California, which on average now gets 30% of its electricity from renewable sources and has set its sights on 50% from renewables by 2030, the marginal kilowatt-hour (kWh) of demand is likely met by power plants burning natural gas, due to their flexibility. That's especially true if many of these cars will be recharged near peak-usage times, instead of overnight as the EV industry expects.

Based on data from the EPA's fuel economy website, most of the plug-in cars I saw at the Washington Auto Show use around 35 kWh per 100 miles of combined driving. That reflects notionally equivalent miles-per-gallon figures ranging from 76 for the BMW i8 to 116 mpg for the eGolf. On that basis an EV driven 12,000 miles a year would increase natural gas demand at nearby power plants by around 30 thousand cubic feet (MCF) per year. That equates to 40% of the annual natural gas consumption of a US household in 2009.

To put that in perspective, if we attained the President's goal of one million EVs on the road this year--a figure that may not be achieved until the end of the decade--they would consume about 30 billion cubic feet (BCF) of gas annually, or a little over 0.1% of US natural gas production. With plug-in EVs making up just 0.7% of US new-car sales in 2014, they are unlikely to strain US energy supplies anytime soon.

It's also worth assessing how much gasoline these EVs will displace. That requires careful consideration of the more conventional models with which each EV competes. While a Tesla Model S surely lures buyers away from luxury-sport models like the BMW 6-series, thus saving around 500 gallons per year, an e-Golf likely replaces either a diesel Golf or a Prius-type hybrid, saving 250-300 gallons per year.  A million EVs saving an average of 350 gallons each per year would reduce US gasoline demand by 22,000 barrels per day, or 0.25%.

At this point the glass for electric vehicles seems both half-full and half-empty. The number of attractive plug-in models expands every year, as does the public recharging infrastructure to serve them. However, they still depend on generous tax credits and must now compete with gasoline near $2 per gallon. More importantly, at current levels their US sales are too low to have much impact on emissions or oil use for many years.
A different version of this posting was previously published on the website of Pacific Energy Development Corporation.
Posted by Geoffrey Styles at 9:01 AM 2 comments: