The Necessity of "All of the Above"

I've devoted a lot of space in this blog to explaining why we need all of the energy choices currently available to us, including energy efficiency, in order for our economy to have the energy it needs to grow. Although we can't drill our way to energy independence, as some might wish, it's equally clear that the point at which renewable energy sources could enable us to dispense with fossil fuels is still a long ways off. I have no idea how many words I've written in service of this argument, but it's certainly many more than the clichéd 1,000:1 exchange rate vs. the picture that I suddenly realized I've never supplied. Today's posting is a modest attempt to rectify that omission: a simple graph showing how a significant shift in our energy consumption and production patterns might play out between now and 2020. 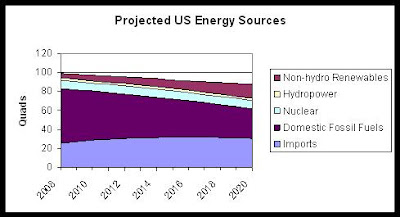 This picture starts with our total primary energy consumption in 2008 of 99.3 quadrillion BTUs (quads.) Nearly three-fourths of our needs, or 73.7 quads, were produced domestically by a mix of 79% coal, oil and natural gas, 11.5% nuclear power, and a bit over 3% hydropower. Non-hydro renewables--the wind, solar, geothermal and biomass power plus biofuels that constitute the primary focus of US energy policy today--made up the remaining 6.5% of domestic energy production. Now add the 26% of US energy consumption supplied by imports, mainly crude oil and petroleum products, and we have the breakdown shown at the left hand edge of the graph. The rest of the picture is the result of a highly simplified set of assumptions based on phasing out fossil fuels and replacing them with the non-hydro renewables that have been growing so rapidly. It ignores such important considerations as reliability and intermittency, compatibility with infrastructure, and turnover of vehicle fleets.

According to the Energy Information Agency's data, while wind and solar power have been growing at roughly 30% per year each, the total renewables category has been growing at a somewhat slower pace, even after separating out hydropower, which has actually declined significantly since the 1990s. While the average growth rate for all the non-hydro renewables since 2000 has been around 4%, I've more than doubled this for the purposes of my projection to 10%. Renewables would do very well to sustain that kind of pace over the next 11 years, because the bigger they get, the more capital they will require each year to add the next year's increment of growth, and the more hurdles they will face, particularly from NIMBY or "energy sprawl" concerns. 10% compound growth would see these renewables more than triple by 2020, providing plenty of room for biomass/biofuels to double and for wind and solar to double several successive times.

I've also assumed a steady improvement in energy efficiency of 1% per year. If that doesn't sound impressive, compare it against a pre-recession trend of 1% annual growth supporting population growth of around 0.7% and economic growth of 2-3%. 1%/yr. would reduce total energy consumption by almost 12% by 2020, reflecting an improvement in BTUs/$GDP over this interval on the order of around 35%. A recent study by McKinsey & Co. indicated that if the US invested $500 billion in energy efficiency, we could cut our energy consumption by 23% by 2020, so my view is only a little more conservative, reflecting my experience that such things tend to take a bit longer than we expect.

As for nuclear, I think we'll do well to maintain the output of the existing fleet without seeing retirements outweigh additions in this timeframe. Most of the new plants now being discussed would probably only affect the last couple of years of this scenario, in any case.

The biggest impact in the graph above comes from my assumption that domestic fossil fuel production would fall by 5% per year. That will probably seem extreme to some and timid to others. It certainly looks extreme in the context of the recent surge in natural gas production and the stable output of US coal mines. Even US oil production has staged a bit of a comeback recently, thanks to successes in the portions of the Gulf of Mexico where drilling is allowed. However, in the absence of strong sustained rates of oil and gas drilling--drilling that requires both access to resources and a supportive regulatory climate, neither of which appears to be forthcoming--these successes will fade and the high intrinsic decline rates of the mature US hydrocarbon basins would take over. And with new coal-fired power plants being canceled and older ones facing tough competition from gas turbines and renewable power, along with restrictions on practices such as "mountaintop mining" and the prospect of either a Congressionally-mandated or EPA-imposed cap on emissions, a decline in coal output would accompany drops in oil and gas.

All of these growth and decline rates working together produce the picture above, showing fossil fuels tailing off faster than renewables can backfill for some time. That results in net US energy imports growing through 2016, then tapering off gradually as renewables finally gather momentum, but with us arriving at 2020 even less energy independent than we are today. That outcome explains my strong conviction that it is premature for us to give up on the valuable contribution of domestic oil and gas, particularly when we take into account the form that most of those growing energy imports is likely to take: imported oil. Naturally, this is just one scenario among many--though I'd argue it's likelier than some--and it illustrates that no single solution, neither renewables, nor efficiency, nor even greatly expanded drilling, is likely to be capable of delivering the energy we will need without increasing our vulnerability to foreign energy suppliers. They must all work together, if we're to make meaningful progress toward greater energy self-reliance.
Posted by Geoffrey Styles at 12:19 PM