Oil prices have trended upward recently, spurring renewed speculation that only speculation could account for such a shift in the face of relatively weak fundamentals of supply and demand. It's certainly true that inventories of crude oil and refined products remain high, while demand is still well below the levels of just a couple of years ago, and OPEC is sitting on millions of barrels per day of spare capacity that could be deployed quickly if consumption spiked. But although it can't account for 100% of recent price movements, one factor stands out for its contribution to oil's lurch towards $80 per barrel after months of stability around $70: the further weakening of the US dollar relative to the Euro and other strong currencies. The future path of the dollar will be determined by a complex set of factors, including the relationship between US and other nations' interest rates, trade balances, current inflation, and expectations of future inflation. However, it's worth noting that the dollar's recent deterioration is hardly anomalous; it is part of pattern going back decades. 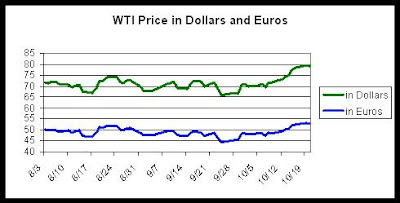 The above chart displays the price of West Texas Intermediate crude oil on the New York Mercantile Exchange since the beginning of August. I've added another line showing the same price in Euros, based on exchange rate data for the period. It's pretty clear that although oil priced in Euros has also been trending upward slightly, perhaps in response to reports that the global demand for other commodities is picking up--indicating that at least some parts of the world are recovering from the Great Recession--the recent upswing in oil prices looks much more muted than when expressed in dollars per barrel. That got me thinking about the long-term exchange rate trends, and where they might take us in the years ahead.

Having lived overseas and traveled extensively, I've been aware of exchange rates for most of my life. That's given me a clear perspective that the dollar isn't just weaker now than it was a few months ago or a couple of years ago, but has been deteriorating more-or-less steadily for a very long time. From my childhood I can recall when a dollar was worth roughly four Deutschmarks, and even my father's salary as a junior Army officer went pretty far on the local economy. As an adult I worked in Germany for a few months in the early 1980s, when a buck still bought more than 2 Marks. With the Deutschmark having been subsumed into the Euro, with its extremely short and volatile history, it's easy to lose sight of the dollar's gradual slippage, which has resulted in an equivalent Deutschmark/Dollar rate today of 1.30:1. Fully appreciating this trend requires examining the longer history of exchange rates between the dollar and more stable currencies such as the Deutschmark and the Swiss Franc, which is now trading at virtual parity with the greenback. It's not a pretty picture, and it has significant implications for a country with such large structural import requirements, not just for energy, but for so many other products.

While I'm not advocating a return to the gold standard or even necessarily dismissing the benefits that a weaker dollar has provided at times, I find the long and bumpy, but nevertheless steadily-downward slope of the dollar's value worrisome. Moreover, it's hard to see what could stem this trend in the near term, with the federal government committed out of necessity to holding short-term interest rates at essentially zero to avoid putting the economy back into a tailspin, while other countries still offer positive interest rates and some have even raised them slightly. Nor do trillion-dollar fiscal deficits seem conducive to a stronger dollar any time soon. What would dollar-denominated oil prices do if the dollar continued to fall past $1.50 per Euro toward the 2:1 level, all other things being equal? $100/bbl probably isn't a bad guess, along with everything else that goes with it.
Posted by Geoffrey Styles at 12:45 PM