Although it doesn't appear among the statistics that economists and market participants routinely track to assess our recovery from what some have been calling the Great Recession, a quick check on the status of the "gasoline stimulus" I described in June seems in order. Year-to-date, the retail price of regular gasoline has averaged $1.31/gallon below its price in the same week of 2008, leaving the typical American household with roughly an extra $110 per month of disposable income to spend on other goods and services, compared with last year. However, barring another dramatic collapse of crude oil prices from their present level of just under $70/barrel, that benefit should disappear within the next few weeks. Last October gas prices fell by more than a buck a gallon and began November 2008 below their current level. Once these lines cross over, any stimulus benefit from cheaper gas will be erased, with uncertain consequences in an economy in which unemployment is still rising. 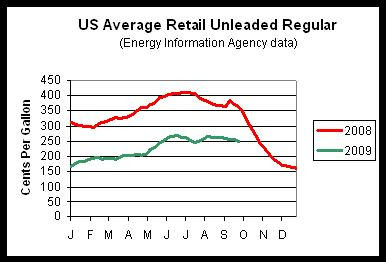 The fact that average US gas prices topped out at only $2.69/gal. this year, far below last year's peak of $4.11/gal., was mainly a reflection of the weakness of the global economy. US gasoline demand through July was running at around 1% below the same period a year earlier, on top of 2008's roughly 3% drop. Together with very weak diesel demand, that also contributed to much lower refining margins this year, compared to the last couple years. However, even if refining margins averaged zero for the rest of this year, it would take a crude oil price drop on the order of $15/bbl to send gasoline prices below $2/gal., where they were last Thanksgiving. And we'd probably have to see oil down around $40/bbl to end the year close to the $1.61/gal. reported last December 29.

As I noted early in the year, although this gasoline stimulus was helpful while the federal stimulus effort was gearing up, it was always going to be short-lived. And just like the fiscal stimulus, we'll never know how many jobs it saved or helped create, though it's clear that we'd have been much worse off had this year's gas prices reprised their 2008 levels.

Posted by Geoffrey Styles at 2:30 PM