To someone living in 1974, during the first energy crisis of the last 40 years, the idea of mass protests to block a pipeline for importing crude oil from Canada would have seemed incomprehensible.  Our environmental awareness has expanded in the interim, along with new channels for exchanging information, including "enduring misconceptions".  Yet the current opposition to so many different energy projects--natural gas drilling, long-distance transmission lines and even wind farms--can also be viewed as an unintended consequence of recent energy successes on a broad front.

The alleviation of what seemed to many a permanent energy crisis might not be obvious, because it has crept up on us. But consider a few of the big-picture elements that have changed:

In crisis mode, US energy security was focused on steadily rising oil and later natural gas imports, while "energy independence" was a goal embraced by politicians but rarely energy experts. Cars offering better fuel economy were available but entailed trade-offs in size and performance. Today, oil imports are falling, the US is a net exporter of refined petroleum products, and public concern about Peak Oil is waning, as measured by internet search activity. Ethanol from corn supplies 10% of US gasoline demand, while other forms of renewable energy are growing rapidly, from a small base. The big question for the federal government this summer is how many natural gas export facilities to allow. Meanwhile, the threshold for fuel-efficient cars has shifted from 30 mpg to 40 mpg, offered in numerous attractive models.

Another way to gauge the success of technologies like hydraulic fracturing, or "fracking", in shifting our energy landscape is to remind ourselves how bad we thought today's situation would be, just a few years ago.  In 2005 the official US annual energy forecast projected oil imports to increase from 11 million barrels per day (MBD) in 2003 to nearly 15 MBD by this year, due to rising demand and domestic production that was expected to remain flat, at best (see below chart.) 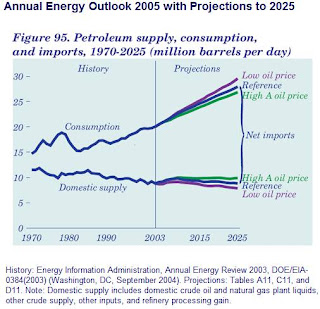 The Energy Information Agency (EIA) also expected US natural gas imports to increase steadily, reaching 3.5 trillion cubic feet  (TCF) of LNG imports this year, on their way to 6 TCF per year by 2022. As a consequence, in 2005 the EIA forecast that coal would still generate 48% of US electricity by 2013. 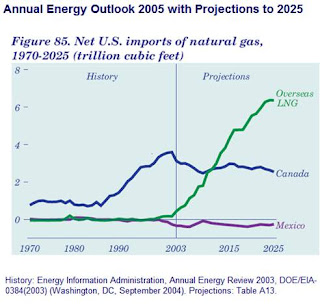 Now imagine energy prices in that alternative 2013. With US natural gas suppliers importing an average of 90 LNG tankers per month, would the wellhead price of gas still be under $4 per million BTUs, or closer to the $16 price paid in some international markets? And with US refiners importing up to twice as much crude oil as they are actually on track to do this year, in the context of sanctions on Iran and turmoil in North Africa, how likely does it seem that oil would be at $105-110/bbl, instead of much higher? $100 oil is a drag on the economy, but US consumers have adjusted to gasoline priced around $3.50-3.75/gal., on average. Every $1 per gallon above that would take another $130 billion per year away from other purchases, with adverse effects on the US economy.

More to the point, in such an environment how much tolerance would there be for opposition to oil pipelines or gas drilling that had the potential to lower energy prices, or at least reduce imports and enhance energy security? If oil were above its 2008 high of $145/bbl, and gasoline flirting with $5 per gallon, it would surely be much harder for elected officials to delay approving projects like the Keystone XL pipeline, or to sustain gas drilling moratoria. Ironically then, the successful large-scale application of shale drilling techniques, which has resulted in a 29% increase in US natural gas production and 33% rise in oil production since 2004, helped make it possible for opponents of Keystone or fracking to be heard, rather than dismissed out of hand.

I was recently struck by a reported remark by a pipeline executive. "Shale is everywhere," he said, but it won't be produced everywhere because "people make choices." I agree with that insight, while recognizing that such choices are available mainly because altered economic conditions and the same technologies to which some now object have enabled us to shed an energy crisis mindset.  This situation might have future parallels for other technologies that have escaped much pushback, so far.

A different version of this posting was previously published on the website of Pacific Energy Development Corporation.
Posted by Geoffrey Styles at 10:46 AM