In our relentless focus on the excesses of the financial sector, many Americans have forgotten that the severe recession we've just experienced was at least exacerbated, if not partially caused by an oil price shock. Now it might be Europe's turn, as the Euro continues its slide against the US dollar. It's a fairly obvious point that a weakening Euro increases the cost of all commodity imports into the EU's Eurozone, while reducing the effective revenue for any exports made with them. Yet when the import is oil, the effects go beyond international competitiveness.

Oil prices have roughly doubled in dollar terms since their low point in January 2009, but they have gone up by an extra 25% in Euros per barrel over the same interval. The divergence this year is even more striking, as the Euro retreats from its highs of last December. Since January 1, oil is up by nearly 6% in €/bbl but down by nearly 12% in $/bbl, as shown in the chart blow. A further retreat to Euro-dollar parity would see the Eurozone's businesses paying nearly as much for oil in their own currency as they did in September 2008, the last time the US saw prices over $100 per barrel. 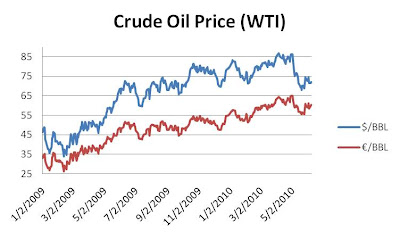 The previous strength of the Euro partially insulated the Continent's businesses and consumers from the worst oil-price pain of the first half of 2008. When oil reached its all-time high of $145/bbl in July of that year, it was barely over €90/bbl. Then, as oil prices ebbed, the strong currency/weak oil combo provided a substantial economic stimulus to Europe lasting well into 2009, with oil averaging just €44/bbl last year, compared to $62 here.

The shoe is on the other foot, for now, as Europe enjoys little of the recent weakening of oil prices from levels above $80/bbl, while experiencing a mini-spike since the start of the year. And with various pundits suggesting the Euro still has a ways to fall, Europe could be facing oil prices over €70/bbl, instead of the roughly €60/bbl for which UK Brent Crude effectively trades today. That would compound the fallout from the EU's fiscal crisis and amplify the risk of a double-dip recession, perhaps even globally.
Posted by Geoffrey Styles at 2:39 PM