Looking Back to Look Ahead

Last week the Energy Information Agency of the US Department of Energy released its Annual Energy Review for 2009. Although it doesn't offer predictions concerning the energy transition that was the subject of last Wednesday's posting, it does include a wealth of charts and graphs visualizing the remarkable energy shifts that have already occurred in the last several decades. Understanding these could help calibrate our expectations concerning the pace of the hoped-for clean energy revolution, while shedding light on characteristics that could move some technologies into the market faster than others. For energy the past isn't necessarily prologue, but it's certainly relevant.

Start with the US primary energy overview for the last 60 years, which shows the steady growth of our energy consumption, interrupted only by two sets of events: the oil shocks of the 1970s and the recent financial crisis and recession (accompanied by a demand-driven oil shock.) Since the early '70s much of that growth was fueled by imported energy, led by oil. This is the part of the story we know best, because its impact on energy security has kept us focused on it for my entire adult life, no matter how ineffective our responses have seemed at times. However, other aspects of our energy situation reflect big, but less obvious changes over that interval, particularly with regard to the production of electricity, the supply and uses of natural gas, and the growth of nuclear power.

We've recently heard a lot about the significance of shale gas, which for many parts of the country could bring the sources of our natural gas much closer to where it's used. Yet this is only the latest aspect of a broader shift that has turned gas from a mainly Gulf Coast and mid-continent resource into a truly national one. In 1970 Texas, Louisiana and Oklahoma accounted for more than 80% of US gas production, while last year they supplied well under half. In the intervening period, production outside these three states more than tripled. At the same time, the ways we use gas have also been transformed. Gas for electricity generation has outstripped residential gas consumption and is about to eclipse industrial gas demand, which has fallen steadily since the mid-'90s, due to volatile prices and the offshoring of manufacturing. The marriage of gas to electricity was driven by a major technology change, in the form of aero-derivative gas turbines for power generation. A chart I could only find in the report's Energy Perspectives section and have reproduced below indicates how much more natural gas-fired capacity has been added in the US in the last 20 years than all other generation technologies combined. Natural gas was more expensive than coal for that entire period, yet no other technology could match its combination of low capital cost, infrastructure efficiency, low emissions, and capability to deliver power when and where needed. Can renewables succeed without matching at least a majority of those attributes? 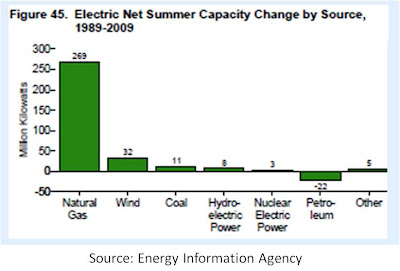 The report puts the recent upsurge of biofuels, wind, solar and geothermal power into the context of a larger renewable energy sector that still meets just 8% of our total energy needs, mainly from mature sources such as hydroelectricity and wood. I can't help wondering whether the development of the US nuclear power sector holds any relevant analogies for the new renewables. Nuclear grew from nothing to 8% of US primary energy and 20% of electricity generation between the mid-'60s and 2000, and in the process helped displace most oil from power generation. Essentially all our current nuclear capacity was built in two waves that rose quickly, peaked in the mid-'70s and again in the mid-'80s, and then subsided to little more than capacity optimization since then. Renewables and nuclear could not be more different, other than sharing a low emissions profile, but the former face enough real-world constraints--including concerns about the environment in its broadest sense--that a scenario in which they, too, stall well short of their full potential isn't so hard to imagine. When you consider a rise as steep as that exhibited by ethanol, or the asymptotic growth of photovoltaic module shipments, it's hard to look at these graphs and not wonder what the rest of the curve will look like: continued rapid growth, plateau (and at what level?), or decay.

I found numerous other charts, graphs and tables offering insights into topics as diverse as the population of alternative fuel vehicles and their energy consumption, the breakdown of electricity consumption in commercial buildings, and the steady drop in energy consumption for space-heating by households, particularly from oil--despite a 35% increase in US population--offset by a near-doubling of household electricity consumption within a generation. And I can't close without mentioning the positive trends in the energy intensity of the US economy--a steady decline for 40 years in BTUs per dollar of GDP--and more recently in per-capita energy consumption. We've accomplished that without a full-court press on energy efficiency, beyond what was incentivized by volatile market prices. What could we accomplish on this front if we put our minds to it?
Posted by Geoffrey Styles at 12:20 PM