Driving across Ohio, Indiana, Illinois and Wisconsin, it's impossible not to be struck by the dominance of corn cultivation in this part of the Midwest. Those "amber waves of grain" in the song look more like amber waves of corn tassels, here. My family makes this drive every few years, and my unscientific impression is that we see more and larger corn fields every time. Given my focus on energy, I couldn't resist spending a few minutes using the hotel Wi-Fi to check on my hunch that most of this has been driven by the explosion of ethanol production in the last decade--up an average of 22% per year since 2000.

Based on data from the USDA, corn production has grown substantially in the last decade, though by a much smaller annual percentage than ethanol output, and with the peaks and valleys you'd expect for a crop affected by the variability of the weather. The total acres planted in corn have risen, though at an even slower rate, so that steady yield improvements have contributed as much as acreage to the growing corn supply. It might seem like an exaggeration to suggest that ethanol is the main factor behind all this growth, yet when you examine the trends in corn disposition, it would be hard to avoid that conclusion, as the chart below shows. 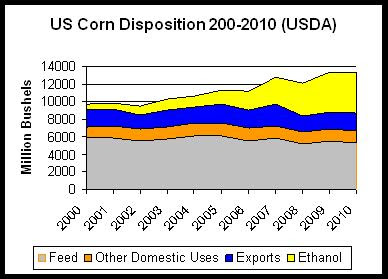 Since 2000, ethanol has gone from consuming about 10% of the annual corn crop to taking just over a third of a much larger crop. Over that same interval, the other main corn demand sectors have remained relatively constant. The modest drop in corn used for livestock feed probably correlates with the increased output of distillers dried grains byproduct from ethanol plants. For all the controversy about high-fructose corn syrup in our food and beverages, the quantity of corn involved in sweeteners hasn't changed much since the mid-'90s, and the US exports roughly as much corn annually today as it did before the current ethanol boom began. So it really does seem to come down to ethanol, and that has important implications for farmers and ethanol producers, because the practical limits of the expansion of corn ethanol are now in sight.

Corn ethanol output has doubled three times in the last decade, but it is most unlikely to double again. Even if the industry can convince the EPA to forestall the looming "blend wall" by raising the proportion of ethanol allowed in gasoline, ethanol's favored status under the federal Renewable Fuels Standard ends at 15 billion gallons per year of output, beyond which it will find it very hard to compete with biofuels from other mandated sources, including sugar cane and--whenever it becomes commercial--cellulosic ethanol. The impending debate over the extension of the current ethanol incentives signals big changes in the trends that have provided such a boost for US agriculture.
Posted by Geoffrey Styles at 3:07 PM