For the last several years, US energy policy has been operating on the assumption that energy security and climate change were pretty much two sides of the same coin, in terms of motivating changes in our energy production and consumption. The Gulf Coast oil spill and some of the proposals for addressing the vulnerabilities it has exposed reveal the extent to which the connection between these two issues has been oversimplified. I've devoted several recent postings to explaining why renewable energy technologies like wind and solar power will have a minimal effect on our dependence on oil, and why vehicle electrification and biofuels look promising but are likely to be quite limited in their impact on imports for at least the near future. However, that doesn't mean we have no good options today. In fact, some quite prosaic measures could have a significant impact while we're waiting for the slower-cooking ones to ramp up. Something as simple as substituting natural gas for heating oil could be a very useful step, meriting additional support.

The broader concept of energy security, as opposed to simply oil security, gained traction a few years ago, when it appeared that natural gas was about to join the list of commodities for which the US would have to rely on steadily-increasing imports to satisfy domestic consumption. Shale gas is reversing that trend, and we are not at risk of becoming net importers of coal or electricity to any significant extent. From the US energy import and export figures, it's clear that our import dependence problem pretty much starts and ends with oil and its products, particularly when you consider that most of our relatively modest natural gas imports come from Canada. But while we may control our own destiny for electricity and natural gas, oil remains as complicated as ever, in part because most oil, but very little electricity, is used in transportation. If we want to reduce our reliance on oil and oil imports, we must focus on either efficiency and conservation, or on direct substitution. And for now, substitutes for oil in its main uses are still relatively small in scale, entail serious performance penalties, or both. However, if we look beyond the high-profile uses of oil in automobiles or aircraft, there are a few areas for which good, large-scale substitutes are available now.

Consider heating oil, a close cousin of diesel fuel. Although natural gas has been eroding the market share of heating oil in residential and commercial applications for decades, US homes still burn on average around 320,000 bbl/day of heating oil, mainly in the northeast. Commercial and industrial users consume a somewhat smaller quantity. Together, this represents about 10% of total US distillate consumption of around 4 million bbl/day (at least when the economy is healthy), or around 2% of total US petroleum consumption. Every barrel of heating oil displaced by natural gas or other fuels, such as bio-heating oil, could fuel diesel cars and trucks--after being processed into ultra-low-sulfur diesel--or be exported to offset a portion of our other imports. Replacing all of the residential heating oil used in the US would free up enough fuel for around 12 million diesel cars like the Audi A3 TDI that I wrote about a couple of months ago. And with natural gas having gotten much cheaper relative to oil, thanks to the growth of unconventional gas supplies, the economic advantage of switching can be considerable, as illustrated in the graph below, comparing residential gas and heating oil prices in New York. 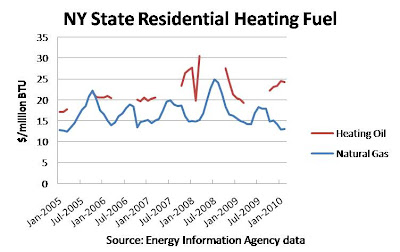 How practical is this substitution? Well, having lived in a part of the country in which many older homes used oil heat, the biggest obstacle for most homeowners is the cost of replacing the furnace and connecting the house to gas. And there are still regions for which the latter is either cost-prohibitive or simply out of the question, because the gas pipeline network hasn't reached every community and neighborhood. (In such cases, propane, which is increasingly sourced from natural gas, may be a good option.) In the long run, particularly with the discovery of vast natural gas reserves in the Marcellus Shale underlying much of the northeast, the gas will come, and so will the infrastructure. The question is whether that process could be speeded up with a little help, and whether it makes sense to do so.

An article I ran across recently suggested that the American Recovery and Reinvestment Act of 2009 (the stimulus) included standards and funding for converting oil heating systems to gas. When I reviewed the text, most of that support seemed to be channeled through existing state programs. Nor did I see anything promoting the expansion of the natural gas pipeline and reticulation network (i.e., "last mile"), which remains the crucial step in this process for many small towns and rural communities. A quick search of the current draft of the Kerry-Lieberman climate bill didn't reveal anything along these lines, either, despite the emissions advantage of heating with gas instead of oil. That looks like a glaring omission to me.

The oil spill in the Gulf has provided a wake-up call concerning our continued dependence on oil and the ineffectiveness of energy policies focused mainly on climate change to address it. Renewable electricity isn't an oil substitute, and while converting cars and trucks to run on natural gas or electricity looks like a useful long-term strategy, it won't deliver big oil savings soon. In the meantime, we shouldn't ignore less glamorous measures that can have a quicker impact, such as accelerating the ongoing replacement of heating oil by natural gas and other non-oil fuels.
Posted by Geoffrey Styles at 1:41 PM

Marky,
You said, "I totally agree with you. If we really want to reduce our reliance on oil and oil imports, we must focus on either efficiency and conservation."

Thank you for your comment. However, the portion that included an advertising link has been removed as a violatio of site policy. If your organization would like to purchase paid advertising on this site, please contact me at the email address provided.

This posting attracted more ad-linked comments than most. Since some of the comments were actually germane, but Blogger gives me no ability to edit out the links, I'm reproducing the relevant parts below, properly attributed. I've deleted the original comments with their ad links. And fair warning to "Sunglow Inc.", future comments like this will be treated as spam. If you'd like to advertise on my site, please contact me at the email address provided.

ferrugiamechanical wrote:
If we look beyond the high-profile uses of oil in automobiles or aircraft, there are a few areas for which good, large-scale substitutes are available now.

Myacandheat wrote:
Such as bio-heating oil, could fuel diesel cars and trucks--after being processed into ultra-low-sulfur diesel--or be exported to offset a portion of our other imports.

There are a few areas for which good, large-scale substitutes are available now.

It's clear that our import dependence problem pretty much starts and ends with oil and its products.
Ac Repair Ardmore

Unknown said...
This comment has been removed by a blog administrator.
10:48 AM

John Terry,
Your comment has been removed for inclusion of commercial links. If you would like to advertise on this site, please contact me at the email provided.

Unknown said...
This comment has been removed by the author.
1:54 AM

Unknown said...
This comment has been removed by the author.
2:47 AM