Yesterday's posting considered possible scenarios for the oil spill emanating from the leaking well in the Gulf of Mexico and explored a few of the implications for US policy towards further offshore drilling. Debate on this topic has already begun, and I expect it to heat up in the weeks ahead as the Congress and administration decide whether to take up energy legislation this year, and as the spill and its direct consequences spread. In order for this debate to be productive, it requires a context, preferably one that encompasses more than the latest images from the Gulf Coast. The environmental consequences of this drilling accident can't be ignored, and neither should the economic and energy security consequences of overreacting to it. My main worry in this regard is that, although we've had spills like this before, we've never had a spill like this in conjunction with politics like today's.

Understanding how offshore drilling fits into the US energy economy seems fairly daunting, but a few key insights can clarify why it has become an indispensable part of our energy supply over the last couple of decades, and why it will remain crucially important, even as we make the transition to a more energy-efficient economy, relying on lower-emitting, more-sustainable energy sources. Total primary energy supply and demand is a useful starting point. In 2008, the latest year for which the Energy Information Agency (EIA) of the US Department of Energy has compiled figures, oil covered 37% of our primary energy demand. On this basis, domestic offshore oil production accounted for about 1/10th of our total domestic and imported oil supply, or just under 4% of all the energy we used. If that doesn't sound like very much, consider that it exceeded the entire contribution of wind, solar, geothermal and hydroelectric power that year. Primary energy isn't the most useful comparison, however, because very little oil is used to generate electricity, and very little electricity is used in transportation. Petroleum and its products hold a unique position in our economy, providing most of the energy for transportation and numerous chemical building blocks for industry.

For decades US oil production and consumption were trending in opposite directions, opening a huge gap that had to be filled by increasing quantities of imported oil and, more recently, by the small but growing contribution of biofuels. Even with US oil demand reduced by 9% due mainly to the recession, net crude oil imports last year still averaged 9 million barrels per day (bpd), or 1.7 times as much oil as we produced here (excluding natural gas liquids.) One of the main reasons those imports weren't higher was that after years of decline, domestic oil production has staged a modest recovery. As the chart below depicts, those gains are entirely attributable to the expanding production of oil from the federal waters of the Outer Continental Shelf (OCS)--the result of deepwater exploration such as that which Deepwater Horizon was engaged in when it exploded and sank. 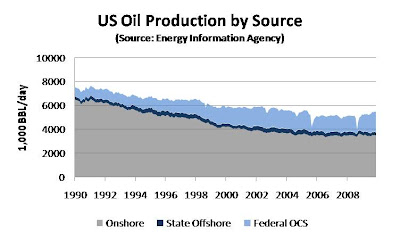 Another key factor in the context of offshore drilling policy is oilfield decline. When you stop drilling new oil wells, production begins to fall as existing wells and reservoirs deplete. As a result, calling a halt to offshore drilling wouldn't imply a standstill in production; it would guarantee a significant decline in output from year to year. My estimate of the magnitude of what's at stake comes from comparing the most recent production forecast from the EIA with the application of realistic decline rates to current offshore production. As shown below, the EIA's 2010 Annual Energy Outlook (Early Release) projected domestic oil production rising back above the 6 million bpd level by 2019, mainly on the strength of drilling success in the deepwater Gulf of Mexico. Without continued drilling offshore, US oil output could be 1.5 million bpd lower than expected by 2020--a very serious shortfall. (That's the gold wedge shown below.) And that would be the case even if onshore production remained stable over that period, which would be unprecedented since the mid-1980s. 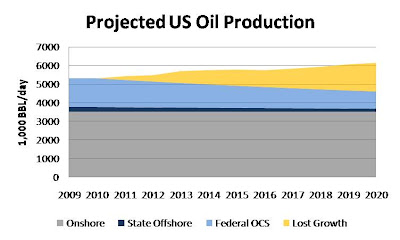 The impact of such a shortfall would go beyond its direct economic value of around $55 billion per year at today's futures market price for 2018. We must also consider what would replace it. Now, by 2020 there could be enough electric vehicles on the road to make a noticeable dent in our oil consumption, although most EV advocates expect the electricity they would consume to back out imported oil and petroleum products, rather than standing in for missing US production. In any case, the majority of cars sold in this country between now and then will burn gasoline and other liquid fuels, so the most practical alternative to offshore oil in this timeframe would be biofuels. Unfortunately, as the chart below shows, current US ethanol output equates to just a fraction of our offshore oil production, after adjusting for ethanol's lower energy content. Corn ethanol production is approaching its mandated level of 15 billion gallons per year, equivalent to 640,000 bpd of gasoline. (It's also approaching the 10% blending limit in gasoline.) Even if the nascent technology for cellulosic ethanol and other advanced biofuels can deliver on the aggressive targets set in the national Renewable Fuel Standard, this would still contribute less energy than the 1.5 million bpd that's at stake offshore. And as with EVs, a barrel of biofuel filling in for lost offshore domestic oil can't be counted again to reduce imports. 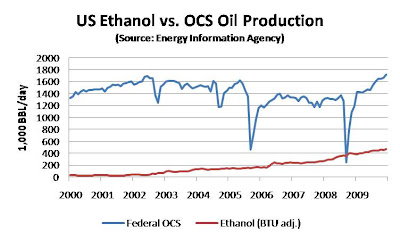 As President Obama alluded to in his announcement in March concerning expanded offshore drilling--pre-Deepwater Horizon, to be sure--domestic oil production has an important role to play in any comprehensive energy policy aimed at reducing our oil imports and greenhouse gas emissions. As I've shown above, offshore oil is the key to stable, dependable US oil production. When you examine the data and realistic projections concerning the contribution of renewables and other alternative energy sources over the next decade, it becomes clear that turning our back on offshore oil production would hobble those efforts by diverting their impact. Although we do have many alternatives to offshore drilling, as critics are quick to point out--including increased fuel economy, vehicle electrification, expanded biofuels, and increased use of natural gas in vehicles and other places we now use oil--we can't employ these steps to both backstop failing domestic oil production and back out oil imports or displace coal-fired power generation. That's because the energy in the quantity of oil at stake is of about the same magnitude as the contribution of these options, at least for the next decade or so. Our policy towards offshore drilling in the aftermath of the Deepwater Horizon accident must take that reality into account.
Posted by Geoffrey Styles at 5:01 PM