Oil Prices and the Recovery

As oil prices continue their upward trend, I'm noticing more articles and getting more comments from readers questioning whether $80-plus oil could squelch the nascent economic recovery--or for those who believe the recession isn't over, deepen it again. It's not an unreasonable question, particularly when we compare current retail fuel prices to their level of a year ago: the "gasoline stimulus" that I was tracking for much of last year. A quick glance at the chart below reveals that instead of paying a dollar or more per gallon less than twelve months earlier, as we were for much of 2009, the average US retail price for unleaded regular is now roughly a buck higher than it was the same time last year. That can't be favorable news for consumers or for businesses depending on a resurgence in consumer demand for other goods and services. But is it enough to stall economic growth? 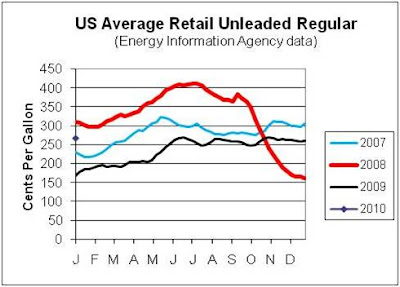 Although I still check oil prices on a regular basis--at least every couple of days, instead of every few minutes when I was trading the stuff--sometimes I notice price trends the same way most of my readers do: by driving by neighborhood gas stations and watching the most visible price in America change day to day. The recent steady, counter-seasonal rise against the backdrop of generally slack demand and comfortably high inventories, and in the absence of any significant global supply disruptions has had me a bit perplexed. And it's really all down to oil prices, since refining margins remain fairly weak and are only as strong as they are as a result of several refineries being shut down entirely and most others running at historically low rates of throughput.

Nor does this seem to be an instance of what I've called the oil-dollar price loop. Since December 11, 2009 crude prices are up by 18%, despite the US dollar strengthening by 3% against the Euro and 5% against the Japanese Yen over the same interval, amid a general surge of commodity prices.

Most analysts seem to attribute higher oil and commodity prices to higher demand from countries like China, as the global economy responds to the impact of various stimulus packages and the stabilization of the banking system. China's growth has been particularly impressive, but even if this is boosting its demand for oil imports by 25%, as one source suggested, that hardly seems likely to swamp the substantial spare capacity that OPEC has accumulated in the last year and a half. As I noted last week, OPEC has successfully held over 3 million barrels per day off the market and maintained global oil prices at a level that wouldn't be possible based only on renewed economic growth in China and its anticipation by the market elsewhere. OPEC has attracted remarkably little flak for this policy, which a year ago probably prevented oil prices from going into free fall. That would have harmed all producers, and eventually consumers, too, by drying up future supplies.

So what's the financial impact of OPEC's self-restraint on US consumers and our economy? Even if you ignore the year-earlier comparison, current retail gas prices are around 30 cents per gallon above their average for last year. For a household driving 25,000 miles per year in typical cars, that's worth at least $25 per month. Across the entire 138 billion gallon-per-year gasoline market, that aggregates to around $40 billion/year. Applying the underlying $13/bbl oil price rise since mid-December to our net oil imports of roughly 10 million bbl/day, that figure increases to just under $50 billion/year.

As unwelcome as this additional drag on the recovery might be, at current levels it seems unlikely to further derail our $14 trillion economy, even if it contributes several billion dollars a month to our trade deficit and, along with high unemployment, depresses consumer confidence. However, near-$3 gas is one thing; widespread expectations of a return to $4 per gallon would be quite another. While higher oil prices mainly due to OPEC restraint aren't yet a cause for panic, this trend certainly bears watching.
Posted by Geoffrey Styles at 3:30 PM