Yesterday provided one of those occasional treats that makes blogging about energy so enjoyable. In conjunction with the Washington Auto Show, I had the opportunity to drive a demonstration version of the eagerly-awaited Chevrolet Volt around an impromptu test track, accompanied by the Volt's Vehicle Line Director, Tony Posawatz, who answered every question that occurred to me and many that didn't. The experience was exhilarating. For a bona fide car of the future the Volt--even in "pre-production" form--looked and handled like a real car that I could imagine myself driving around town or on a long trip, aside from its impressive technology and efficiency. That's an important distinction, since to be truly successful the Volt and its eventual siblings must be able to compete beyond a niche market of green-oriented consumers. 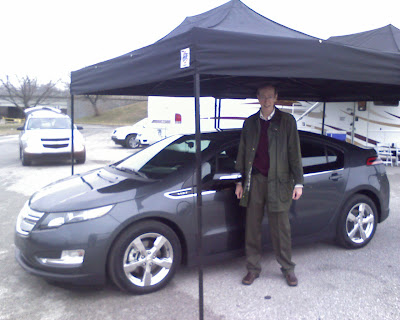