As the readership of this blog has grown, I find myself receiving more inquiries from small PR firms seeking my aid in promoting some issue, product, or cause. Last week, I was contacted by an agency working with the Pew Center on Global Climate Change on their campaign in support of the 35 mile per gallon Corporate Average Fuel Economy (CAFE) standard under consideration in the Congress. After an exchange of emails with the PR contact, I learned that the message for conservatives is intended to emphasize CAFE's impact on energy independence. Instead of harping on the practical impossibility of that goal, I'd rather look at how a tougher CAFE standard could align with other measures and arrest the steady deterioration of our energy independence that has taken place over the last two decades.

I haven't changed my view that CAFE is a relatively weak policy by itself--a target and a tracking mechanism without the teeth to drive the change it will measure. The original CAFE standards probably get too much credit for the improvement in fuel economy that followed the oil price spikes of the 1970s. And while they kept fuel economy on the radar screens of the auto companies after oil prices collapsed in the mid-1980s, their loophole for light trucks--designed to protect small businesses--subsequently midwifed the explosive growth of SUVs. So if we regard CAFE as an important and consequential metric, but not the prime driver of automotive fuel efficiency, it forces us to think about the larger environment in which it plays out. CAFE won't be out there by itself.
Today that environment includes two primary drivers of change. The first is energy security, manifested by the high and volatile prices we pay for fuel. The quantity of energy we import affects those prices directly, through our competition with other consuming countries for the limited exports from oil producing countries, and indirectly, by expanding our trade deficit and weakening the dollar. But while "energy independence" has been part of the campaign rhetoric of most of the presidential candidates, I've yet to hear one quantify it. The chart below highlights the decline in US self-sufficiency, in terms of the share of our total primary energy consumption that we produce ourselves. Remarkably, at 71% our current level of energy independence is much lower than when independence first became an aspirational target in the mid-1970s. Nor has renewable energy made a noticeable dent in the problem, so far.
Energy Independence, % 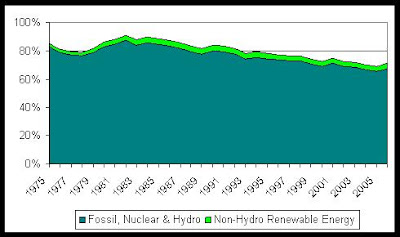 (source data from http://www.eia.doe.gov/emeu/aer/txt/ptb0101.html)
Although the decline in US oil production contributed to this deterioration, we actually produce more primary energy today than we did in 1984, when we were 90% energy independent. The cumulative effect of demand growth has been the big story, here, and CAFE speaks directly to that trend.

The other major driver of change is global warming. Whether the current fires, drought, Arctic melting, or any other phenomenon is directly attributable to man-made climate change, it is noteworthy that the question is now asked in every case. I will cover the Lieberman-Warner climate change bill, which was introduced last week, in more detail later. Even if it turns out not to be the last word on a cap & trade system, it is becoming hard to imagine a future in which the Congress does not pass meaningful legislation limiting US greenhouse gas emissions. The details are important, but the fundamental fact of assigning a monetary cost to CO2 emissions represents a step-change in the economics of energy and transportation.
Taken together, that means that a 35 mpg CAFE standard would be implemented against the backdrop of high oil prices with no end in sight (eerily reminding me of 1982) and escalating costs for the CO2 that is an inevitable byproduct of burning gasoline, at the rate of 20 pounds for every gallon. Achieving 35 mpg will doubtless reduce those emissions and break the trend of our growing energy dependence. However, it must be the consequences of those high oil prices and of monetizing CO2 that ultimately convince consumers to buy the cars that will make 35 mpg attainable. And if that mechanism isn't as clear-cut as the high carbon tax that many economists would prefer, it at least has the virtue of being possible in the current political environment.
Posted by Geoffrey Styles at 10:40 AM