Lately, it seems that everyone has an opinion on why oil prices have reached the threshold of $100/barrel, including several of the candidates in last night's Democratic Presidential Debate. This morning's Wall Street Journal offers some theories from an interesting source, two ministers of an organization that features prominently in many analysts' explanations of the current market tightness: OPEC. Apparently, OPEC's members are vexed at being blamed for high oil prices, which they attribute to three factors: the weak dollar, market speculation, and refining bottlenecks. Considering the source, it's worth spending a few minutes examining these arguments to see whether they have merit.

Let's start with the easiest to dismiss, the refining sector. You don't even have to think through the logic of this argument, which inverts the usual understanding of how temporary shortages in refining capacity normally exert downward pressure on the prices of specific grades of crude oil, as volumes are backed out of the system and crude inventory grows. All that's necessary is a look at refining margins, which measure the difference between the revenue refiners receive for the products they sell and the cost of their raw material. These margins are dramatically lower than they were in the spring and early summer, when crude oil was trading in the mid-to-low $60s. This tells a clear story. Refining capacity--in the US, at least--is not tight, and this factor has not contributed to oil's $15 sprint in the last four months.
Next consider speculation. I don't think this can be dismissed quite so easily, at least as a general contributor to oil prices over the last four years. As I've noted before, the growth in demand for oil futures and options within the broader financial portfolios of hedge funds and other investors must put upward pressure on futures prices, and thus on the enormous volumes of physical oil that are sold at prices pegged to the futures. Still, there's some evidence that the speculative flow has reversed in the last few months, as the ripples from the sub-prime crisis have dried up credit and forced some firms to liquidate positions. In other words, it's much easier to see how speculation contributed to oil's rise from $40 to $70 than from $70 to $90.
That brings us to the dollar, and as the recipients of roughly $2.8 billion dollars per day at current prices, OPEC ought to know as much about that subject as anyone. A chart of oil prices for the last two years expressed in both dollars and Euros reflects remarkable differences, but doesn't quite tell the story that the OPEC ministers might wish. 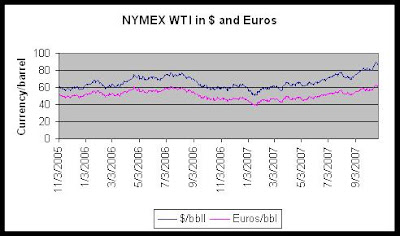 Between June 1 and October 18 the dollar price of oil on the New York Mercantile Exchange increased by 37%, while in the same period, the price in Euros had risen by almost 30%. There is clearly a lot more at work here than the weakness of the dollar, at least over the last four months.

So while each of these factors has contributed to the escalation of oil prices since 2003, they don't explain why we suddenly find ourselves staring at the prospect of $100/barrel by Christmas. Instead, I think we have to examine the long-term fundamental trends of the industry, which are currently colliding. Demand continues to grow, driven by strong global economic growth, including many places where consumers are insulated from the true market price of petroleum products. Non-OPEC production can't keep up with this growth, because of the combination of production decline rates, drilling bans, and the lagged effects of the near collapse of the industry in the late 1990s. And that's where OPEC comes into the story.

As the world's main oil exporters and the holders of 69% of global proved oil reserves, at the latest count, OPEC has not planned properly for the growth of their long-term market. This isn't a question of the dwindling increments of existing capacity they are holding back by mutual agreement, but of their failure to reinvest in their core business and expand capacity ahead of demand. There are many reasons for this, including domestic financial pressures in many member countries, the impact of sanctions on Iran, and the war in Iraq. They have generally kept out the international companies that possess the motivation, capital and capability to develop OPEC's unexploited reserves, while failing to do the job themselves--with a few notable exceptions, such as the current expansion program in Saudi Arabia.
Whether this underinvestment in new capacity is due to resource nationalism, the inefficiency of state oil companies, or a deliberate effort to keep the market tight, OPEC must bear at least half the responsibility for $90+ oil. The other half, as one of the candidates implied last night, lies with US consumers (along with their counterparts in China and elsewhere) who have increased our demand steadily, with little thought of where the next gallon was coming from. Unless we do something to alter that trend, OPEC will continue to win and we will continue to lose from this ongoing collision.
Posted by Geoffrey Styles at 10:45 AM