Does the Gas Tax Belong in the Fiscal Cliff Fix?

Recently I've seen several articles along the lines of this one from CNN, suggesting that an increase in the federal gasoline tax might be included in negotiations to avert the impending US "fiscal cliff".  While the gap between the gas tax, which was last raised in 1993, and highway repair costs grows each year, that's not just because past Congresses and administrations have been reluctant to hike it again.  As I've discussed in previous posts, gas tax revenue is declining for structural reasons related to curtailed driving, rising fuel economy and alternative fuel vehicles.  Simply adding another 10-15 ¢ per gallon to the current 18.4 ¢ tax wouldn't solve the long-term problem, although it would raise enough revenue to allow us to continue to ignore these growing challenges for a few years.  For that and other reasons, changing the gas tax deserves closer scrutiny than the waning hours of a preoccupied lame-duck Congress can provide.

Yesterday I attended another excellent event held by Resources for the Future in Washington, DC.  This one was devoted to "The Future of Fuel."  The panel discussion began with a presentation of the current energy forecast of the Energy Information Agency (EIA) highlighting the shifting energy mix the agency expects between now and 2035.  Although the slide deck didn't include the chart below, taken from EIA's 2012 Annual Energy Outlook, I couldn't help thinking of it in the context of both yesterday's meeting and the question of future fuel tax revenues. 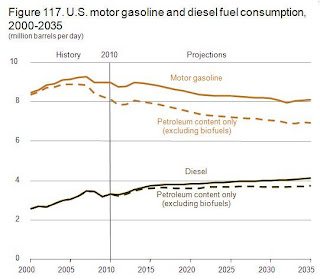 The EIA forecasts US gasoline demand to decline by about 8% from current levels by 2035 as cars meeting the new federal fuel economy standard enter the fleet, along with small but growing numbers of vehicles running on electricity and other non-petroleum fuels. An 8% drop in gasoline sales--and thus gas tax revenues--doesn't sound large until you realize that the current gas tax system was predicated on consistently rising gasoline sales as a means of expanding revenues. That's crucial, because highway construction and maintenance costs rise each year, too.  If gasoline sales were still growing at the 1% annual rate typical when the gas tax was last increased, gas tax revenues would be at least 37% higher by 2035 than the level the EIA would now project.

Stepping back from the details, the government faces a fundamental disconnect between its need to raise sufficient funds from the gas tax to cover the cost of maintaining the nation's road network and explicit federal policies aimed at reducing our consumption of the fuels being taxed.  Another one-time bump in the gas tax, whether of 5¢, 10¢ or 15¢ per gallon, will again be overtaken by the combined forces of inflation and declining volumes.  Fortunately, this problem is well-understood and a number of solutions are under consideration.  Inconveniently, many of them involve basic and controversial changes in how the road tax would be collected, such as shifting to a mileage-based tax assessed via annual inspections or real-time GPS monitoring.

No one should expect or desire the 112th Congress to resolve these issues between now and the end of its term in January, particularly when the money at stake represents such a tiny fraction of either the fiscal cliff's package of tax increases and spending cuts or of the entire federal deficit.  I'm also not sure that reforming the gas tax belongs within the larger federal tax reform effort that should be undertaken next year, because the issues involved are so different from those associated with revamping the business, income, and payroll taxes.  Even a temporary fuel surtax would likely encounter strong opposition, due to its regressive nature and coincidence with gasoline prices that, despite recent declines, remain at or near seasonal record highs.  Unlike the rest of the fiscal cliff, this might just be one can that would benefit from being kicked down the road, at least past the current crisis.
Posted by Geoffrey Styles at 11:16 AM

The erection of the "fiscal cliff" was arguably one of the dumbest things ever done by a US Congress, in conjunction with a US Administration.

The failure to produce a federal budget for 4 fiscal years is arguably one of the lest responsible things ever done by a US Congress, in conjunction with a US Administration.

I do not believe any action should be taken on anything until there is a budget for FY2013. I would prefer a balanced budget, but I realize that is far too much to expect from our congresscritters and Administration.

I also have no sympathy for the President's "taxes now - cuts later" approach, since history demonstrates that the promised cuts rarely occur.

Ed,
With tax receipts recovering to 2006/7 levels, it should be clear that the bigger near-term problem (before Social Security/Medicare eat our lunch) is on the spending side. See: http://www.whitehouse.gov/sites/default/files/omb/budget/fy2013/assets/hist01z1.xls

The data show we've increased baseline annual spending (after expiration of the stimulus) by $1T over 2007 in a period with minimal price inflation. Irrespective of one's politics, that can't be described as reflecting any kind of restraint.

The gas tax should be implemented with a mechanism that automatically adjusts it on an annual or bi-annual basis. In effect, it should approximately be a percentage of the average gas price, but implemented as an occasionally adjusted price per gallon to avoid volatility.

Jim,
Glad you mentioned that. The governor of Virginia has just suggested something similar for the state gas tax, which is less than half California's.

Ross Taylor,
You wrote:
"The failure to produce a federal budget for 4 fiscal years is arguably one of the lest responsible things ever done by a US Congress, in connection with a US Administration. Thanks for sharing this information. Looking forward to hear more about it."