Natural Gas and The Gulf Hiatus

With so much attention focused on the boom in natural gas from new shale resources, we shouldn't lose sight of the importance of domestic offshore gas, mainly from the Gulf of Mexico. Although it has been declining for the last decade, offshore production still accounts for about 13% of US gas output. Before the Deepwater Horizon disaster the Department of Energy expected that proportion to increase again to as much as 18% of a larger total. However, if drilling in the Gulf doesn't resume--and fairly soon--not only could that portion of our supply deplete rapidly, but its shrinkage would erase much of the incremental contribution from shale gas, a scenario depicted in the chart below. If that occurred, ambitious plans to capitalize on shale gas to displace coal or imported oil would be nullified, and gas prices would shortly revert to their previous upward trajectory. 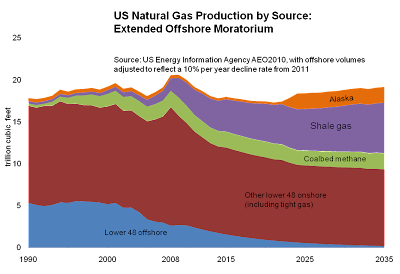 Despite the official end of the deepwater drilling moratorium and the recent release of new guidelines to aid the industry in filing for deepwater permits, it doesn't look like drilling has resumed or is likely to do so any time soon. Meanwhile, deepwater drilling outside the US seems to be recovering rapidly. It's almost irrelevant whether the ongoing US offshore hiatus is the result of the complexity of new rules and regulations, inadequate staffing of the reorganized Bureau of Ocean Energy Management, Regulation and Enforcement, or what some believe is a tacit, unofficial moratorium on the part of the administration. Together with the recent withdrawal of plans to lease portions of the Eastern Gulf of Mexico, where significant gas resources had already been discovered, the hiatus threatens to return the US to our previous situation of increasing reliance on LNG imports, in spite of growing shale gas output.
Aside from the gas volumes and the significant number of industry and related jobs involved, there's also a fair amount of government revenue at stake in the form of forgone royalties and bid bonuses. Salazar's announcement indicated new offshore leasing wouldn't resume until late next year, at the earliest. That wipes out at least $500 million of expected bonuses--the figure for 2008 was $6.9 B--and the aggregate production decline resulting from no new drilling would lead to a steadily increasing loss of annual royalties, as existing fields deplete and aren't replaced. Between extended environmental studies, delayed permits, and areas re-designated as off-limits that were expected to be available within the 2007-12 cycle, our offshore energy supplies are looking precarious, and that will eventually influence the price we pay for energy--for both gas and imported oil. Recent polling suggests the majority of Americans understand that.
As I've noted before, no one expects things to revert to the way they were before this summer's massive oil spill. However, if we erect too many obstacles in the way of exploiting the abundant hydrocarbon resources of the Gulf of Mexico--even for natural gas, which although subject to the risk of blowouts presents little or no risk of spills like the one from the Macondo well--the costs will not just be financial; they will extend to our environment and energy security.
Posted by Geoffrey Styles at 12:08 PM