I recently received an offer from my household natural gas supplier, Washington Gas, to lock in my gas purchases for the next 12 months at a price of $0.699/therm. They reminded me that I had paid as much as $0.96/therm and as little as $0.68/therm over the last 12 months, before distribution charges, so on the surface this looks like a good deal. Of course the real measure of the attractiveness of this offer is not what I've paid in the past, but what I'm likely to pay in the future if I don't take advantage of it. Unsurprisingly, Washington Gas left that for me to work out. This is no simple task, even if you follow energy trends as closely as I try to do.
The price of natural gas is notoriously volatile, particularly in years when supply is tight, the economy strong, and weather extreme. Historically, gas often spiked in the winter months, as cold weather drew down stockpiles, and traders bid up the price for prompt delivery. That pattern has shifted somewhat in recent years, as seen in the chart below, not because global warming is making winters warmer--though that seems to be the case in the most general sense--but because US gas consumption patterns have shifted. 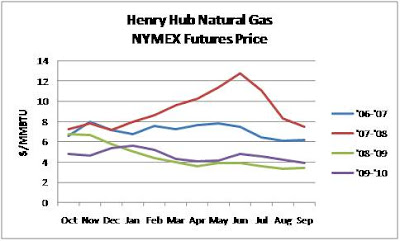 In 1997 residential users accounted for 22% of total US gas demand, commercial and industrial users took nearly 52%, and just 18% went to power generation. Last year residential use was 21%, but commercial and industrial had fallen to 40%, while the power sector took over 30%. And since power generation, for which gas turbines are often the incremental supply, typically peaks in the summer months, the annual peak of gas prices is now as likely to occur in June or July as in January or February. That's an important consideration if you're a residential customer like me. Of the roughly 1,100 therms my household consumes each year, 84% are bought between November and March.
In this context the first place to check on whether the offer from Washington Gas is fair was the futures market. Yesterday's average closing price for the one-year "strip" from November 2010 to October 2011 was $4.26/million BTUs. That's the price at the Henry Hub, a gas distribution point in Louisiana. In order to compare it to what I've been offered, I need to account for the average differential, or "basis", between that location and the supply point for Northern Virginia. The "city gate" price for Virginia over the last year averaged $2.39/MMBTU higher than Henry Hub. Even that doesn't quite get me to the Purchased Gas Price that shows up on my utility bills. Over the last 12 months I paid an additional $0.60/MMBTU, on average, because the mix Washington Gas sells me includes gas purchased under long-term contracts, as well as incorporating the results of its hedging activities. When I add all this together, the equivalent futures-based price to compare to the deal I've been offered for the next 12 months works out to about $7.25/MMBTU, or $0.73/therm. For the November-March period that will affect me most, it's around $0.71/therm.
From that I conclude that my supplier is offering me a price that's in line with the market, and that I couldn't beat it even if I did the hedging myself. However, it's important to recall that the futures market isn't a forecast; it's just the current consensus on what buyers and sellers are willing to agree on today, based on everything they know. In order to decide whether I should lock that in and give up any upside or downside, I ought to have a point of view on gas prices, based on supply, demand and inventories. The supply side is dominated by surging shale gas output, which has taken US gas production to levels we haven't seen since the 1970s. For production to drop by enough to drive up prices significantly within the next year, the shale gas bandwagon would have to slow appreciably. That's certainly possible. In several presentations at the recent IHS Herold Pacesetters Energy Conference I saw graphs indicating that a number of producers aren't covering all their costs at current prices. Some of them must continue drilling new wells in order to satisfy the terms of their leases, but others could slow down if they chose. A slowdown in drilling would translate into reduced supplies fairly quickly, because of the rapid drop-off of output from individual wells. Even bigger supply risks are inherent in the growing environmental concerns surrounding shale gas drilling, which have seen New York's state senate vote to impose a moratorium on shale drilling. Yet while it's hard to envision a big enough drop in output from any of these factors, soon enough to affect this winter's prices, it's even harder to see so much additional shale gas coming to market in the next year that it would drive prices well below current levels.
On the demand side, the weak economy dominates, particularly in the industrial sector, which despite having rebounded from last year's lows is still running well below its consumption in the early 2000s. A sizable fraction of that lost demand isn't coming back, even if the economy started growing at rates more characteristic of past post-recession expansions, because the high gas prices of the previous decade drove some fertilizer and petrochemicals producers out of business or offshore. The biggest upside demand potential comes from the power sector, which is also suffering from low demand, at the same time we see low gas prices and environmental pressures displacing coal with gas and renewables. That's a clear medium-term trend, though as with reduced shale drilling, the situation seem unlikely to change much in the next 3-6 months.
That leaves gas inventory as the last major fundamental factor to assess. As of the most recent figures, gas storage was running about 5% below the same week last year, but ahead of the previous three years. A severe cold snap might test these inventories, but they don't loom as a big upside price risk today.
On balance, then, it appears I've been offered a fixed price that is not only in line with the current futures market, but at which I would also be giving up relatively little chance of paying significantly lower prices later--barring a double-dip recession--while gaining protection from weather or supply-related surprises. If the next year looked exactly like the last one did, I'd end up saving a bit less than $100. If you've followed my logic this far, you might think this was a lot of effort in order to convince myself that what looked like a good deal really was, but then I guess that's the lot of a former commodity trader who routinely had to make decisions like this, but for much larger stakes. And perhaps I've given you some food for thought, in case you're facing a similar decision.
Posted by Geoffrey Styles at 3:13 PM

Just came across this while researching about a fixed price offer I received from NOVEC Energy Solutions in Manassas, VA.

Would you consider a fixed price of $.61 a good deal for the upcoming year?

Of course it's a month old now, so please draw your own conclusions.

This is an interesting write-up. And looking at this five years out gives me even more pause on signing up.

I'm now offered a price of $.497 / Therm. While they notice that the prices have gone up since January.. I'm thinking the over-all, year on year trend has been down. Something I could probably look up, but this seems to justify it.

Thinking I'm just going to stay put. Thanks for the time you put in to this. It's a good read.