The Energy Transition Is Already Underway

Lately I've been struck by the number of new groups and proposals calling for America to begin the transition to cleaner energy. We even heard this call from the Oval Office several weeks ago. Yet while there's clearly much more to be done to wean ourselves from our reliance on oil and other high-carbon fuels, I'm baffled by the suggestion that this process didn't actually begin long ago--not just in the last year and a half--with policies and R&D initiatives put in place by at least the previous two administrations. Perhaps it's fashionable to ignore our progress to date, because acknowledging it serves as a reminder that the process will require decades to complete, and that the end-point might not resemble the one we imagined when we began.

Let's start by recognizing that a massive energy transition is already well under way on many fronts, including the development of advanced biofuels, nearly-mature wind power, highly fuel-efficient vehicles, electric vehicles, solar power that's not just a science fair project, and a range of other technologies and policies for reducing oil consumption and greenhouse gas emissions. These didn't just appear spontaneously; most required literally decades of effort to get to this point. So if we're already headed down this path, rather than arguing about starting out should we rather be asking how much we can do now to accelerate this shift?

Take fuel economy, which seems simple, because we all understand miles per gallon, or think we do. But how many people realize that the incremental fuel savings from higher mpg shrink as mpg increases? The chart below shows the annual fuel consumption for a car driving 12,000 miles per year, about the national average, versus fuel economy in mpg. The improvement in Corporate Average Fuel Economy of new cars between 1978 and 2008, from about 20 mpg to 27 mpg, has already saved a very substantial 160 gal/yr per car, while the increase to 34 mpg by 2016, the new CAFE target, will save another 90 gal/yr. However, advancing from there to 44 mpg, roughly equivalent to the 2012 EU target of 130 grams of CO2 per kilometer, would save only an extra 80 gal/yr. That's no reason not to move ahead with more efficient cars, but we must recognize that we've already captured the steep part of a curve that is now flattening out, as the cost/benefit of each successively-harder increment diminishes, unless they burn no oil at all. That's where biofuels and EVs come in. 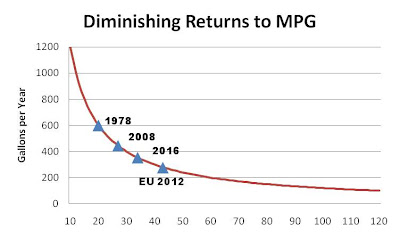 The Renewable Fuels Standard established by Congress in 2007 calls for a quantity of advanced and cellulosic biofuels by 2022 that exceeds what we currently get from corn ethanol. The problem is that at this point, after many years of hard work developing these technologies, there is not a single commercial-scale cellulosic biofuel facility design that has been built, tested and certified for profitable replication on the scale required, despite a special production tax credit of $1.01/gal. Nor do I conclude that's for lack of the government, private investors and big companies like ExxonMobil, Chevron, Shell, and BP throwing plenty of R&D dollars at the challenge. Within a few years we might be at the point at which billions of extra dollars for advanced biofuels would result in hundreds of such facilities actually being built, but then plenty of experts thought we would already be at that point by now, including the EPA, which had to ratchet back its cellulosic ethanol quota for this year from a level equal to the annual output of one corn ethanol plant to the quantity that a corn ethanol plant produces every three weeks or so.

The prospect for EVs looks more immediate--though still on a relatively small scale--with GM and Nissan launching flagship models later this year. However, as I noted in a recent webinar, every million EVs running entirely on electricity would save 31,000 barrels per day of gasoline, or about 0.3% of our current usage, and that's assuming they would replace cars getting today's average mpg, rather than Prius-type non-plug-in hybrids, as seems likelier to me. It's going to take a whale of a lot of EVs to make a real difference, and it's not yet obvious that offering more than the current $7,500 in consumer tax credits to buy them, or handing out more than the billions that have already been given to car companies--including some that have never built a mass-produced car--is going to put a lot more of these vehicles on the road in the next few years than would happen under existing policies that are still playing out.

However attractive energy visions such as the President's might be, even to me, there are practical limits to additional activism at a point when so many wheels have already been set in motion. I do understand that the nation is riveted by the oil spill, and that transforming this interest into support for a broader energy agenda could be a once-in-a-generation opportunity. At the same time, I worry about an approach that relies on expanding already-unsustainable financial incentives for clean energy deployment at a time when the deficit has taken on the aspect of a black hole threatening to devour our future, energy and otherwise. To see the energy transition really take off, we must reach the point at which the alternatives are unambiguously better/faster/cheaper than oil, or can at least match its cost and convenience in its primary transportation energy uses, and are not merely better for the environment--as important as that is. We're not there yet, but we've clearly already begun the journey.

Energy Outlook will be on holiday the rest of this week and through the July 4th weekend.

Posted by Geoffrey Styles at 12:01 PM