Delaware Refinery Swims Against the Tide

When I saw this headline in today's Wall St. Journal, "Governor Stays Closure of Delaware Refinery," the first thought that crossed my mind was of King Canute and his order to stop the tide. Valero Energy Corp., which owns the Delaware City refinery, had announced last fall that it would be shut down and dismantled. That was a pretty remarkable turn of events, considering that not very long ago refining margins were at all-time highs, boosting the fortunes of independent refiners like Valero and causing politicians and energy experts to despair that the US didn't have enough refinery capacity to keep pace with future demand. But while I understand the state government's desire to preserve the jobs and tax base involved, it's worth asking whether Governor Markell and the firm that appears ready to buy the refinery for $220 million are making a good bet or merely postponing the inevitable. Two graphs of the key fundamentals for this sort of refinery raise serious doubts.

More than 100 US refineries have closed in the last several decades, but few of those were as large or sophisticated as the Delaware City Plant (DCP), which was originally built by Getty Oil to process heavy oil from the Neutral Zone between Kuwait and Saudi Arabia. My former employer, Texaco, owned it for a while, as a result of its acquisition of Getty, before putting it into its refining and marketing joint venture with Saudi Refining Inc., which later included Shell. That JV sold DCP to Premcor, Inc., an independent refiner then run by the current CEO of PBF Energy Partners, LP, the company that is now buying it from Valero, which has owned it since its purchase of Premcor in 2005. The number of times it changed hands probably says more about the evolution of the US refining industry than about any inherent shortcomings of the facility, which is a complex machine for turning low quality crude into lots of gasoline and other valuable light products. Unfortunately, that description encapsulates the two biggest challenges its new owners, creditors and employees face.

Start with gasoline, which remains the most important product for most US refineries, accounting for about half of all US petroleum product sales and roughly 60% of refinery yield on crude oil input. Historically, US gasoline consumption rose by a steady 1-2% per year, and refineries often struggled to keep pace with demand, resulting in significant imports of gasoline and blending components. Two factors have altered that relationship, perhaps permanently. First, rapidly-increasing ethanol production, backed by subsidies and a steadily-escalating mandate, is eroding the market share of the gasoline that refiners make from crude oil. So now even when "gasoline" sales go up, they include an increasing proportion of ethanol. And as a result of the recession, total gasoline sales--including the ethanol blended in--fell by 3.2% between 2007 and 2008. When you factor out the ethanol, the drop was more than 5%. So because of weak demand and increasing ethanol use, refineries like DCP have experienced a shrinking market for their most important product, as the graph below depicts. 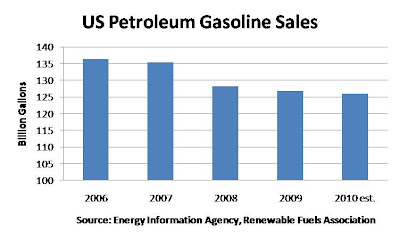 Then there's the issue of refinery complexity, which is a two-edged sword. When both crude and product markets are tight, as they were in 2006 and 2007, complex refineries like DCP enjoy a cost advantage over less sophisticated competitors, because they can make the same products from cheaper, lower-quality crude oils--typically heavier and higher in sulfur and other contaminants. But when the global economy stalled in 2008 and oil demand plummeted, many of those low-quality crude streams were the first ones that producers cut back, because they yielded less profit at the well-head than lighter, sweeter crudes. With less supply, the discount for them relative to lighter crudes shrank, and with it the competitive edge of facilities like DCP. In the case of Saudi Heavy crude, shown below, it looks like that discount was cut in half starting in late 2008, which was probably the last time DCP made decent returns. 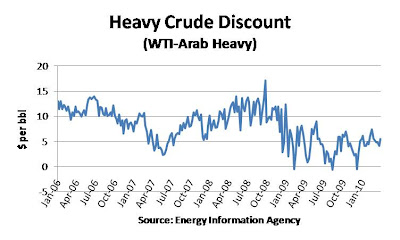 What must happen in order for DCP to become a viable proposition in the future, other than for PBF to buy the facility for a fraction of its replacement cost--even less than Mr. O'Malley paid Motiva for it in 2004? Number one would be for light/heavy crude differentials to widen again. That could reasonably be expected to occur when the global economy grows by enough to bump up against OPEC's spare capacity limits, again. With spare capacity currently standing at more than 5 million barrels per day, that's unlikely to happen soon. However, even with a wide enough discount for its preferred crude supply, DCP will still be pushing gasoline into a weak market, thanks at least in part to continued expansion of ethanol. One indication of that comes from Valero's earnings report for the fourth quarter of last year, in which its ethanol business earned operating profits of $94 million, while its refining business, with more than 40 times the throughput, lost $226 million.

I would have been sorry to see the Delaware City Plant, with all its history, sold off for parts and scrap. After all, this is pretty much the kind of refinery that some were hoping the US would build, just a few years ago: large, complex, close to major markets and outside the hurricane belt of the Gulf Coast. However, the world changed in the interim. Will it change back enough to make DCP a going concern, again, or are the taxpayers of Delaware sinking more money into a facility that is destined to be a victim of Peak Demand, as more efficient cars and more prevalent biofuels squeeze enough petroleum products out of the market to ruin the economics of all but the most-efficient, lowest-cost refineries? We should know within a few years.

Posted by Geoffrey Styles at 3:37 PM