The story above the fold on the front page of this morning's Wall St. Journal suggested that the Commodity Futures Trading Commission (CFTC) is about to issue a report tying last year's oil price spike to speculation by non-industry participants in the oil futures, options and swaps markets. This would reverse the agency's previous finding that speculation had not played an important role in influencing the record-breaking prices we experienced in 2008. Although I plan to assess the report with an open mind, the dissemination of such contradictory conclusions--separated mainly by the handoff from one administration to another--hints that a jaundiced eye might be in order regarding both. More important than any politics that might be involved, however, is the deeper question of whether the futures-market speculation the CFTC has apparently uncovered actually harmed the real economy by spreading its contagion to the markets for physical oil with which consumers interact. The answer to that question has serious implications not just for the justification of stricter regulation of energy markets, but for overarching policies and trends affecting the production and consumption of real energy.

As I noted in a posting last summer, the growth of the futures exchanges over the last two decades has fundamentally changed oil trading. Most oil is now bought and sold on price formulas pegged to the futures prices, or to published market reports strongly influenced by them. What traders are agreeing to when they do a deal is not a fixed price, but a differential above or below a particular futures contract during a set period, usually aligned with the time when the shipment will be loaded or delivered. So while these differentials fluctuate due to a variety of factors, the price that refiners pay for crude oil remains directly tied to the futures price. That means that anything that drives up the futures market, whether a disruption in supply, higher demand, or speculation by a new class of commodity investors, has a direct impact on what we all pay for the products that refineries make.

When I discussed this issue last summer, I was careful to note that if the prices for physical grades of oil moved in lock step with the futures price, that might not by itself absolve speculators from driving up those prices, along with the futures. Other factors could produce a similar result, even if the futures were mainly driven by speculation. However, when I now look at last year's price relationships for two of the most important crude oil streams in the country, I see evidence that goes beyond a neutral result and undermines the notion that anything other than the fundamentals of supply and demand was driving prices in the run-up to oil's peak of $145 per barrel last July.

The chart below tracks the price difference between two important grades of physical oil and the monthly-average NYMEX futures price for West Texas Intermediate, which is the focus of the CFTC's investigation and the principal grade of oil against which most US oil--and indeed much of the world's--is typically priced. I chose Alaskan North Slope crude and West Texas Sour because both are produced in substantial quantities, are representative of the medium-gravity, medium-sulfur crudes that many US refineries turn into gasoline, and cannot be delivered into the NYMEX WTI contract. While there might conceivably be some degree of speculation in these grades, anyone buying them would be required either to take physical delivery themselves or sell to a refiner or other physical buyer before the oil was delivered. If futures market speculation had been driving the prices of these grades of oil last spring and summer, we'd expect to see their discounts either remain steady or widen, indicating that they were being dragged along by frothy futures. Instead, between March and July 2008 we see these grades strengthening relative to WTI--their discounts shrinking--both sequentially and relative to their average discounts since 2004. In other words, in that period the prices of these grades of physical oil appear to have been stronger than the futures market that was thought to be driving them. 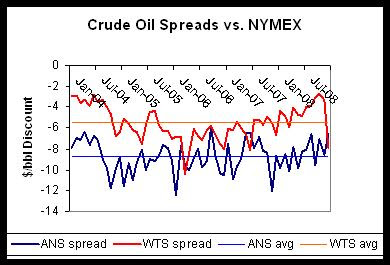 Why is that important? First, the argument for stricter regulation of the commodity markets, beyond the very sensible suggestion to increase the transparency of participants' trading positions, depends on a finding that speculators not only influenced the futures markets in which they participated directly, but also the price of the physical oil purchased by refiners and thus the prices of the petroleum products that consumers, trucking companies, school districts, airlines and others purchased, to the detriment of the economy and our trade deficit. If speculation was driving oil futures but not the price of physical oil, the necessity for clamping down on it aggressively begins to resemble a fever remedy that works by banning thermometers that read above 99 degrees.

Of greater significance, I believe, is the psychological effect on our expectation of oil prices in the future. If we convince ourselves that $145 oil and $4 gasoline were mainly the fault of big, bad speculators, and that regulating them will avert such an outcome in the future, we foster a dangerous illusion that supply and demand will somehow always result in prices more congenial to our preferences and lifestyles. That's arrant nonsense, and you don't have to be an ardent believer in Peak Oil to see how unrealistic expectations of low future oil prices can stimulate demand and stifle expensive oil projects, with their long inherent time-lags. That would eventually lead to precisely the outcome we wish to avoid: much higher oil prices.

Since the summer of 2007 I have been arguing that speculation might have been influencing oil prices around the edges, but that with or without it the narrowing gap between growing demand and straining supply was the main factor behind high prices. The sudden inversion of those forces--the sharp drop in oil demand caused by the recession and the growth of inventory and restoration of adequate spare production capacity--equally and fully explains the price collapse that followed, pummeling exposed speculators and index investors. Whatever the CFTC concludes about last year's price spike, it shouldn't distract us from the necessity of investing in expanding oil production and alternative energy sources, while working hard to improve the efficiency with which we use energy, and particularly oil. Blaming it all on Wall St. would be the quickest way to undermine the gathering momentum for improving our real energy security.
Posted by Geoffrey Styles at 1:57 PM