US gasoline prices have attracted a fair amount of attention recently, as they climbed from a national average of just over $2.00 per gallon in mid-April to $2.69 last week. Much of that increase came just before Memorial Day, which historically signals the start of the driving season and higher consumption. Some regions have even begun to see prices at $3.00 or higher. As the news media has reported on this trend, I've heard more than one reporter comment that the recent price hikes have erased the effective economic stimulus that lower gasoline prices provided earlier this year. That didn't sound quite right, considering how much higher prices were last summer, but it wasn't until I looked at the actual data that I realized the stimulus has actually grown in the last month or so, not shrunk. However, unless oil prices are headed for an even bigger collapse than they experienced last fall, this stimulus must be short-lived. It will probably end entirely by November.

The aspect of economic stimulus I'm considering here results from the year-on-year comparison of average US gasoline prices. As the graph below shows, since slumping oil prices drove the pump price of gasoline below its level of a year earlier, starting last October, US unleaded regular has averaged $1.25/gal. cheaper than in the same week a year earlier. Even with gasoline demand down by around 3%, that equated to an injection of roughly $170 billion after-tax dollars per year into consumers' pockets. Despite the recent increase in prices at the pump, that year-on-year gap has grown, averaging $1.41/gal. since Memorial Day. For the average household, which owns two-plus cars and drives nearly 25,000 miles per year, that has reduced monthly expense budgets by around $120, compared to 2008. This has surely come in handy, as unemployment grew and we all waited for the federal government's $787 billion stimulus to ramp up. 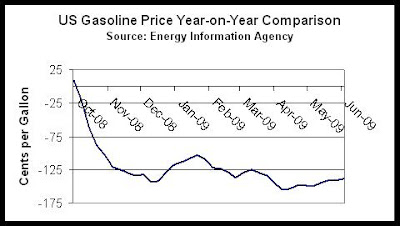 Unfortunately, by the same definition I've used above this gasoline stimulus has a time limit, because it is essentially a mirror image of last year's pricing trends. The effect is widening just now, as we approach the anniversary of the all-time peak of oil prices of $145 per barrel on July 14, and the all-time high US gasoline price of $4.11/gal. that accompanied it. However, once we pass that point the normal seasonal weakening of the gasoline market would be hard-pressed to echo the slide that took oil prices all the way down to a more than four-year low under $34 by year-end 2008. While gas prices should retreat closer to $2/gal. again by fall, they're unlikely to go lower, ending the 2009 vs. 2008 pump-price gap.

As the economy recovers, we should expect prices to trend back up, independent of the eventual increase we can expect from the climate bill the House of Representatives passed last Friday--assuming the Senate ultimately passes a bill similar enough to the House version of cap & trade to be reconciled and become law. That means that future fuel prices are likelier to be a drag on the economy than a boost. Anyone putting off a road trip this summer due to "high gas prices" should perform a quick reality check on whether they are ever again likely to be much lower at this time of year.

Posted by Geoffrey Styles at 9:50 AM