Over the weekend I participated in a panel discussion on space-based solar power (SSP) at a space-development conference, for the second time in as many months. My presentation focused on what it would take for a new source such as SSP to find a place in our energy diet, which will be changing at the same time that the technology for producing power in space and sending it to markets here on earth develops. The audience of entrepreneurs and space professionals was quite engaged by the idea that SSP couldn't just be a space project; it had to be a viable energy project, too. These same challenges apply to any new energy technology with a long development period, including some that are much more established than SSP. But with politicians, pundits, and experts of all stripes telling us we must rapidly shed our addiction to fossil fuels, the inertia of our present energy diet remains the under-appreciated elephant in the room.

I began my brief remarks with a simple pie-chart showing US energy consumption for 2007, based on data from the Energy Information Agency of the US Department of Energy. As replicated below, it showed the breakdown of our primary energy supply--the raw energy going into power plants, factories, and oil refineries for further processing into fuels, electricity and materials, along with the contribution from nuclear power plants and those energy sources that produce electricity directly, such as hydroelectric dams, solar panels and wind turbines. Despite the recent, breathtakingly-fast growth of wind and solar, and the tremendous success of the nuclear industry at squeezing more output from its 104 existing reactors, the low-emission portion of our energy diet only accounts for 15% of our primary energy needs, and less than a third of our electricity demand, with 93% of that coming from mature hydropower and nuclear sources. 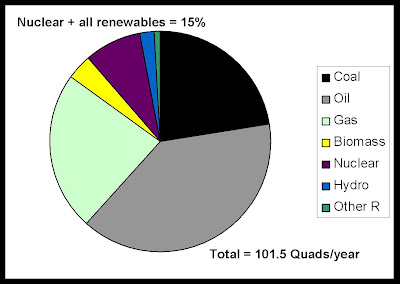 As in a diet, not all calories are equal or interchangeable. The 39% of this diet supplied by oil cannot be replaced by renewable sources of electricity without a lengthy and dramatic change in our vehicle fleets, because oil accounts for less than 2% of our electricity generation, and there's very little of it left to displace from the power sector. Nuclear power and natural gas already accomplished that task over the last several decades. The much bigger challenge now is to shift the roughly 97% of transportation energy currently derived from oil to other sources--either electricity in the view of Al Gore, Dr. Andrew Grove and others, or natural gas, as suggested by T. Boone Pickens. But as we make that shift, we can't leave the portions of our economy that will still depend on oil high and dry. We must continue to provide enormous quantities of petroleum, even as we work aggressively to shrink its share of our diet and expand the portion supplied by sources that don't emit greenhouse gases or contribute to our trade deficit. It is fundamental to the nature of oil production that if you don't keep drilling, its supply quickly dwindles.

Tom Friedman's column in Sunday's New York Times drew a parallel between Mr. Gore's ten-year goal for ending our use of fossil fuels and President Kennedy's commitment to reach the moon in a decade. Unfortunately, this analogy breaks down once it gets past the R&D stage. I regard our accomplishment of landing two men on the moon 39 years ago yesterday as the pinnacle of the 20th century. It was a remarkable feat, requiring billions of dollars and hundreds of thousands of scientists, engineers, and support staff of every description, yet it ultimately only put 12 Americans on the lunar surface. We're talking about displacing 85% of the current energy diet of a nation of 300 million people that accounts for between a fifth and a quarter of global GDP. Doing that within a decade wouldn't just be moonshot-impressive; it would require a flat-out miracle.

Posted by Geoffrey Styles at 11:51 AM