An article in today's Financial Times provides key insights for anyone trying to understand how oil prices reached their current heights, and where they might go from here. This requires more than just an examination of the highly-visible oil futures markets. We need to look at what refiners--who along with a few utilities in Asia are the ultimate customers for all crude oil--are paying for the grades of oil they actually run. Many of these crudes look very different from the West Texas Intermediate and Brent Blend traded on the New York Mercantile Exchange and the Intercontinental Exchange. But while the price relationships among these different grades of oil certainly contain clues about the impact of oil-market speculation, I'm not sure the evidence exonerating speculation is quite as conclusive as the FT suggests.

The growth of the futures exchanges over the last two decades has fundamentally changed oil trading. Most oil is now bought and sold on price formulas pegged to the futures prices, or to published market reports strongly influenced by the futures. What traders are agreeing to when they do a deal is not a fixed price, but a fixed differential above or below a particular futures contract during a set period, usually aligned with the time when the shipment will be loaded or delivered. So while these differentials fluctuate due to a variety of factors, the price that refiners pay for crude oil remains directly tied to the futures price. That means that anything that drives up the futures market, whether a disruption in supply, higher demand, or speculation by a new class of commodity investors, has a direct impact on what we all pay for the products that refineries make.

Crude oil price differentials are determined by several factors. Some of them are fixed, some change gradually, and others shift continuously. A barrel of Saudi Heavy crude (2.8% sulfur, 27 API gravity) is intrinsically worth less than a barrel of Nigerian Bonny Light (0.14% sulfur, 34 API), because the former will yield less high-value gasoline, diesel and jet fuel than the latter without intensive refining. But how much more a barrel of Bonny Light commands in the market depends on the relative prices of all the various petroleum products when it is sold, along with the location and availability of spare capacity in the complex refineries that have the hardware to overcome those intrinsic quality differences. As the chart below shows, the premium for Bonny Light over Arab Heavy is quite volatile, and it does not necessarily depend on the absolute price of crude oil. It was nearly as high in October 2005, when WTI was $62/bbl. as it is with WTI at more than twice that price. 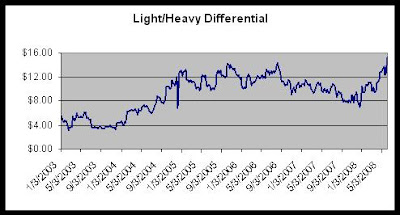 As the FT correctly notes, various factors have contributed to make light sweet crudes more valuable and heavy sour crudes less valuable, relative to each other. By itself, though, this does not prove that speculation hasn't driven all of these prices higher than they otherwise would be, because refiners focus mainly on the price relationships among different grades of crude oil, and between crudes and the wholesale prices of the products they yield. Refining is a margin business. Higher absolute prices tend to weaken demand and make it harder to pass on increases in their costs, but refiners have no more control over the market price of oil at $130/bbl than they did at $50/bbl or even $20, so they focus on what they can control: in the short run that means finding the cheapest grades of crude that will yield the products they need to meet their sales commitments, and in the long term it involves investing to enable them to run even cheaper, lower-quality crudes, if increasingly intrusive regulators will allow it.

When we compare the acquisition prices reported by US refiners to the Energy Information Agency for the actual mix of imported and domestic crudes they bought through April 2008, we see that although the discounts to WTI have widened in the last year, they are not unprecedented. As a result, refiners are paying well over $100/bbl for even the least attractive crude oil grades. 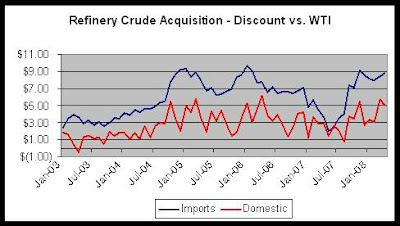 On balance then, what does all this tell us about the influence of speculation on oil prices? In the view of the Financial Times and others, speculation is unlikely to be the major driver of high oil prices, since the prices for the physical crudes that refiners process have increased more or less in lock-step with the futures prices we observe, rather than disconnecting in the manner that might logically be expected, if the oil futures were experiencing a speculative bubble. However, I would argue that this hypothesis depends on an understanding of the oil markets that is at odds with the actual structure of the market. The manner in which physical oil is traded with reference to the futures price, combined with the reinforcing-loop relationship between crude oil and refined product prices, makes a disconnect between these markets improbable, even if the futures were caught up in a speculative bubble. That's not good news, because it suggests that we might not know whether we're in a bubble until it collapsed, either under its own weight, or through regulatory intervention.

Posted by Geoffrey Styles at 1:09 PM