Despite much political rhetoric to the contrary, economists are not yet certain whether the US economy is in a recession, or merely experiencing a period of slowing growth. If history is any guide, and if we're lucky enough to experience a brief contraction instead of a lengthy slump, we might not even know for sure until after it's over. But with the odds of one now much higher than they were last year, I was surprised to read an article in the Financial Times suggesting that the prospect of a recession doesn't figure in the plans of many large energy companies. A review of some data from the early 1990s indicates that the industry is not as recession-proof as it might wish to believe.

Even without a recession, the growth of US gasoline demand has already slowed significantly from an average of just under 2% per year from 1992-2002 to about 1% per year over the last five years, as gasoline prices rose in tandem with crude oil. The Department of Energy hasn't finalized its 2007 figures, yet, but gasoline demand growth appears to have fallen below 0.5%, thanks to near-record prices in the second half of the year. But that's not as low as it can go. During the recession of 1990-91, gasoline demand shrank by an average of 1% per year, at a time when the average gasoline price was well under $2.00 per gallon in 2007 dollars. A couple of years of 1% declines would cut US gasoline demand by 180,000 barrels per day (bpd.) 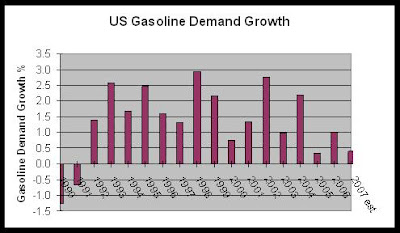 Viewed in isolation, that doesn't sound like much. Now put it in the context of a federal renewable fuels mandate that will add another 4.5 billion gallons of ethanol per year within two years, or around 300,000 bpd, and two massive refinery expansions in Texas and Louisiana, which together could add at least another 250,000 bpd of gasoline supply by 2010. The net change over that period would reduce the current US gasoline deficit--the average daily quantity we must import--from 1.1 million bpd of finished gasoline and blending components to 400,000 bpd.

So far, this all sounds fairly positive for both the industry and the country as a whole: more domestic output, less consumption, and all at the expense of some foreign suppliers. The problem from an industry perspective, however, is what this could do to refining margins, because of the way the market functions. Imports come in when the local supply falls short and the local wholesale price increases by enough to cover the foreign price, plus freight and a profit for the importer. And while those imports are arriving, all the domestic refiners supplying that market benefit from the higher price, increasing the margin they make on the crude oil they process. Taking 700,000 bpd out of gasoline imports might still leave us short over the course of the year, but it would reduce the frequency and possibly the duration of periods when imports would be required in areas that don't rely on them for their base supply. I don't see how that could fail to take a bite out of refining margins, which for the last several years have been sufficiently robust to transform the refining sector from a perennial drag on oil company profitability into a major earnings contributor.

Irrespective of what might happen to crude oil prices in a slowdown, recessions and refineries don't go well together. Companies with a large exposure to refining, particularly the pure-plays and those with expansions coming on-stream in the next two years, ought to be thinking very seriously about how a recession might affect them, and making their plans accordingly.
Posted by Geoffrey Styles at 10:46 AM