Two news items from the last week stand out, energy-wise. First, the OPEC summit in Riyadh ended without any consensus on the need to ramp up production dramatically, to provide consuming countries with price relief. Meanwhile, the IPCC, which recently shared the Nobel Peace Prize with Mr. Gore, has advised that global warming is worse than we thought, and global emissions must begin falling within 15 years to avert serious consequences. Taken together, these events suggest that we face a future in which oil production is likely to fall short of demand, with high-carbon alternatives such as coal liquefaction, oil sands, and shale constrained by emissions limits. Conservation remains one of the few solutions to both problems that could be both quick and cost-effective, though it is probably our least politically-appealing option.

When we think about energy conservation, we naturally tend to jump to efficiency, which is an important subset of conservation. Raising CAFE standards is a good example of this kind of thinking. But even if efficiency looks cheaper than many of the alternatives, it still doesn't always offer quick payouts on the required investments, even with oil at $95/bbl and gasoline over $3/gallon. And whatever else it is, it's not quick, because of the time required to turn over fleets and installed capital equipment. There's another side of conservation that could be both quick and cheap, though addressing it is unpopular, because it goes to the heart of how Americans live now: residing farther from work to afford a nicer home or earn a bit more, driving the kids all over town so they can participate in every activity that interests them, and so on. I'd argue that we focus on CAFE precisely because no one dares to take on the deeper issues.

As the chart below illustrates, Americans do respond to higher gasoline prices, up to a point. The rate of growth of gasoline consumption has fallen from 1.5-2.5% per year to less than 1%, which is roughly equal to the rate of population growth. 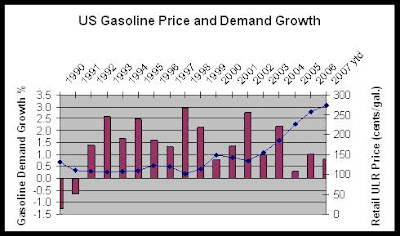 Reduced growth, however, does not yield an absolute decline in consumption. We haven't experienced that since the recession of 1990-91.

What if we could reduce demand by 5% within one year, without a higher gas tax and without having to wait for carmakers and consumers to respond to a new 35 mile-per-gallon CAFE Standard that entails either switching to much smaller existing car models or opting for hybrids and European-style diesels in large numbers? We could eliminate almost a half-million barrels per day of oil imports--roughly the production-quota increase that OPEC will discuss at their December meeting. The chart above suggests that price alone won't get us there, at least not without doubling again.

The only practical way to achieve such an outcome quickly would be voluntary conservation, asking the average American to drive about 12 miles less per week. It would be truly refreshing to hear the presidential candidates suggesting such a simple--and politically risky--measure, instead of competing to propose the highest future CAFE standard. It would also confront the reality that the responsibility for consuming 142 billion gallons of gasoline per year rests not only in product-line decisions made in Detroit, Japan and Germany, but chiefly in the daily choices of hundreds of millions of our fellow citizens. If we're seriously concerned about the impact of high oil prices and impending climate change, that's where the discussion must focus. I think politicians underestimate us, by shielding us from that particular truth.
Posted by Geoffrey Styles at 8:29 AM